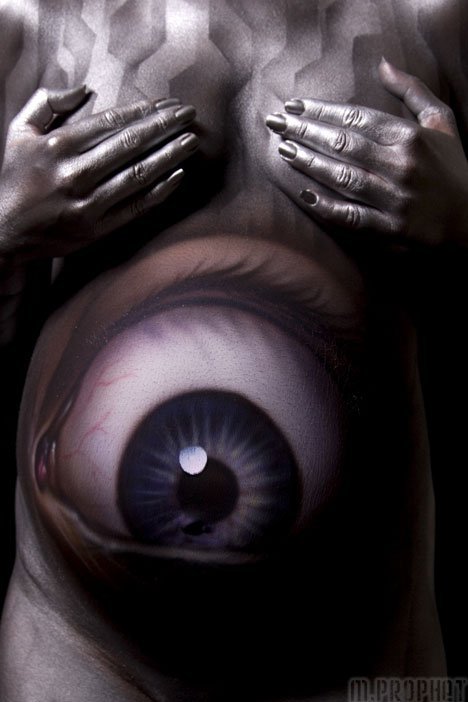 Paul Roustan creates some of the most phenomenal images I’ve ever come across. His kickstarter project is to create the first high quality three dimensional body paint hologram . 3-D images on 3-d Holograms means this would be the first 6 dimensional image, ever? Am I correct?

He’s part of a small but dedicated group of artists known as body painters. Originally from the Windy City Paul earned a BA of Fine Arts from the Art Institute of Chicago in 2002. During his time at the Art Institute Paul became interested in holography. He worked his way up from being “just” a student in ‘98 to become the holography lab manager in ‘99. Eventually Paul and his wife moved to Rhode Island and Paul earned a Master of Arts in Teaching Degree from Rhode Island School of Design in 2006.  Between the Art Institute and RISD Paul began body painting and it has grown into his primary focus (raising his children actually comes first).

Paul is known for his amazing 3D images that look almost too real to believe. He says on his kickstarter page,

The biggest problem I face with my work is the viewer’s perception of what is real and what isn’t. I’m often asked, “Is this photoshop or is it real?” As a result, to erase any doubt, body painting is best viewed via video and live performance. Here is a link to a video of the body painting process.

Paul has tried to raise the funds to do this over the past two years by applying for grants. The grant jurors typically reacted positively or negatively without much middle ground which seems to be par for the course in this form of art.  The costs of doing a series of holographic images is significantly higher than other forms of “3D art.”  This is an actual 3d form without the need to wear special glasses and without any trickery.

To produce a simple hologram, a beam of coherent, monochromatic light, such as that produced by a laser, is split into two beams. One part, the object or illumination beam, is directed onto the object and reflected onto a high-resolution photographic plate. The other part, the reference beam, is beamed directly onto the photographic plate. The interference pattern of the two light beams is recorded on the plate. When the developed hologram is illuminated from behind (in the same direction as the original reference beam) by a beam of coherent light, it projects a three-dimensional image of the original object in space, shifting in perspective when viewed from different angles. 1

At the Art Institute the holography lab was made up of lower-powered lasers which could only capture immobile objects.  In order to capture those objects needed to be placed upon a vibration isolation table because the slightest movement can ruin the capture.  By using pulsed holography Paul can capture an image of a person or even moving water.  There is no need for massive vibration isolation tables and it is possible to get several different captures in a single day.  Once the capture has occurred the next step is to create a positive from the master.

When a light wave hits the Master holographic film, it acts as a (diffractive) filter, allowing some light to pass through and pick up the imprint in the medium. However, unlike a photographic image, it is the interaction of the new light wave with the recorded interference pattern that is seen as a 3D image. It is 3D because the new light wave becomes modified by the wave-interference pattern recorded in the emulsion and appears thereby as the ORIGINAL light wave emitted by the object itself. 2

This is going to be a one of a kind item due to the process being similar to photography in developing the captures, the model will be painted with an airbrush, and only the lasers really need computer intervention.  Paul is offering those who back him a number of rewards.  He explained the costs that are involved in this process and he’s actually going to be losing a small amount on each of the 12’ x 16” 3D Holograms but that’s a small price to pay to make his dream come alive.

Check out the gallery below for more of his body paintings.