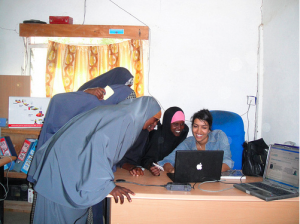 Women lead non-profit Samasource is tackling a great social issue while helping to get some of the menial grunt work of today’s biggest internet companies complete. Leilah Janah is the founder of this incredible organization.

Samasource has trained women living in third world countries with basic computer skills and outfitted centers in India, Pakistan, Haiti, Uganda, South Africa and Kenya. These centers have basic computers, internet and access to samahub which provides the trained women with microwork.  Microwork can include meta tagging, light data entry and other small digital tasks that many in the big companies that utilize Samasource don’t want to do.

Some of the corporate participants include Google, Linkedin and Intuit.

“Outsourcing is a one trillion dollar industry,”  Janah tells 7×7.com. “We train these women and then we bring them work. We are serving an entirely new demographic. These are people who would not get employed otherwise. They were earning less than $3 per day before Samasource. They are all from rural areas or from the slums.”

Samasource has trained over 2100 women to date to do these jobs. The organization says that these women can double their income within two to three months.

They’ve received a $1.5 million dollar grant from Google.org and they also recently won a Secretary of State’s innovation award for the empowerment of women and girls. That involved a $500,000 prize for the organization.

The 30 year old founder of Samasource began the organization in 2009. She had read an article about a Dutch non profit that had set up a computer lab in the Dadaab refugee camps in Kenya. Janah thought wouldn’t it be great if she could teach the women in the refugee camps to use the internet to do jobs while at the camp. She enlisted the help of Lukas Biewald a former Yahoo engineer.

Biewald used his crowdsourcing website called Crowdflower to help Janah find work for the refugees. Janah trained the refugees to use Google and do data entry and from their her non-profit was born.

For more information on Samasource check out samsource.org