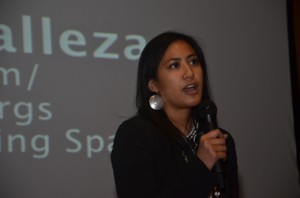 As you probably heard, women in startups played a big roll in the inaugural everywhereelse.co The Startup Conference. The conference which had over 1200 attendees on site featured panels like “Kick Ass Female Founders From Everywhere Else” and other panels which featured startup founders from everywhere else.

One of those bad ass startup chicks that was in the audience and networking all conference long was Jeannette Balleza the director of Ark Challenge, Arkansas’ premiere startup accelerator, and member of the Global Accelerator Network.

Balleza is no stranger to startups. After college she went straight to startup life launching her own company, Scribe Marketing. She is also the co-founding archivist of the award winning family history website DeadFred.

Balleza is a busy busy woman but always finds time to strengthen the Arkansas startup community every chance she gets.

She serves as a Board Member of the Northwest Arkansas Entrepreneurship Alliance, advises a number of small businesses and non-profit organizations and is part of the team spearheading the region’s first co-working space, The Iceberg. She is a member of The CEO Forums of Northwest Arkansas, and she coordinates the Professional Women’s Network Washington County. She was honored as one of Northwest Arkansas Business Journal‘s “40 Under 40” in 2008, and in 2009 she was selected as one of 135 U.S. entrepreneurs by British Airways to attend The Face of Opportunity Global Business Summit Conference in London.

We caught up with her, not in NorthWest Arkansas but rather in Central Arkansas for the ThinkBig Arkansas event and the kick off of Startup Arkansas. She provided a quick speech to attendees with an update about Ark Challenge and the exciting new Iceberg coworking space. Check out our interview below, the first of many to come in our series Bad Ass Startup Chicks. 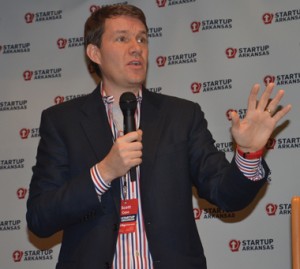 If you’ve ever heard Scott Case, the CEO of Startup America and founding CTO of priceline.com speak than you are very familiar with the subject of the headline. Case often talks about the movie Field of Dreams and it’s most popular line, “If you build it they will come.”

A lot of startup founders have the same philosophy, they think that no matter what they do as long as they build it people will come. It goes along the same lines as growing organically, or magically.

Sure there are huge grand slams every now and then but most of them either come from founders with long pedigrees in startups or because they caught the backing of name brand venture capitalists and angel investors early on. For others, gaining traction requires marketing. For bootstrapped (or sneaker strapped) startups that often times means grass roots marketing, crowdfunding, and good ole donations.

When speaking, Case follows the Field of Dreams example with, “if you market it they will come” a valuable lesson.

In the video below he talks about his first big venture into entrepreneurship. He built a product in 1994 that was packaged software and still available to this day. He talks about buying a full page advertisement in the biggest industry publication for his product. The problem though, the phone never rang. That’s when he set out to learn marketing.

In talking with Case we discussed “canned speeches” and how I’ve personally seen Case speak over 30 times in the last year. The thing about him though, is that he doesn’t do the same canned speech at every event, but he often resorts to the Field of Dreams story, because it’s not a valuable lesson, but the most valuable lesson.

Now go watch this hilarious video from the Startup Arkansas kick off.

We’re on the sneaker strapped nationwide startup roadtrip part deux, find out how you can help here 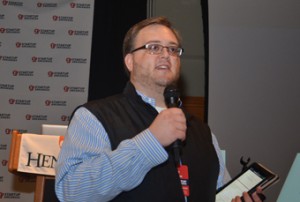 Hendrix College in Conway Arkansas was bursting at the seams with young entrepreneurs and seasoned corporate executives. They’ve come together this morning to celebrate the kick off of Startup Arkansas and to Think Big Arkansas.

Event organizer, Lee Watson, did a great job of bringing startup community leaders from the entire state in to Conway for this event.

Scott Case the CEO of Startup America and founding CTO of Priceline will be keynoting today. Brad Feld, the author of Startup Communities should be at the event in the evening as well.

The morning session kicked off with entrepreneurs and event organizers from 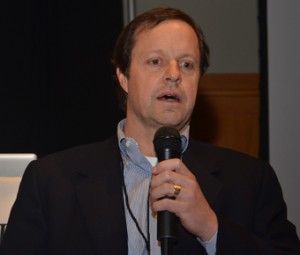 organizations like BarCampConway, Startup Weekend, Innovate Arkansas, Ark Challenge, Made By Few and many others, to talk about what’s going on with their organization and how to bridge it all together in one cohesive unit.

In a pre-event dinner Thursday night Startup Arkansas Regional Champion Luke Coleman reached out to myself and Scott Case to address the problem that there are “cliques” in each part of Arkansas. Noooooo I had never heard of that before????

Tennessee is no stranger to where Coleman sees a huge opportunity for growth, however in Tennessee we’ve done a great job of overcoming our hyper local focus and celebrating the victories in each of the 9 accelerator regions. It’s not uncommon to see a van or bus ful of Memphians at a Nashville or Chattanooga startup event, and vice versa.

Friday morning the parallels continued, confirming the main theme of the recent everywhereelse conference, startups and startup communities everywhere else have commonalities in problems and growth areas. 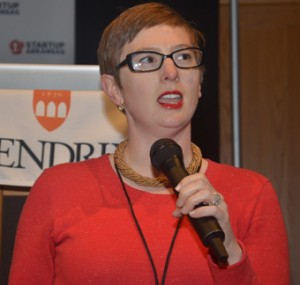 At the beginning of the event Arkansas Regional Champions Dave Moody, along with Coleman, brought 5 attendees up to the mic to share their ideas for a better community.

Abbey Keever with RedClay echoed one of Scott Case’s favorite themes,which was don’t try to be the next Silicon Valley. Keever, an experienced business woman and the fearless leader at RedClay, said she would love to see Arkansas expand in startups in their biggest areas, of course retail (Walmart) and logistics (Walmart and JB Hunt).

Most every startup community we’ve seen is starting to get their patriarch companies or at least their industries intertwined in the growth of the community.

Other ideas included keeping the dialoge open and holding vertical specific summits to give entrepreneurs access to closer related resources.

If you haven’t seen this amazing video from Thursday night, Go here now!

Startup America, Nibletz, Work For Pie, and the Startup Arkansas crew really hammed it up on the eve of Startup Arkansas’s kick off and Think Big Arkansas. This video really needs no introduction.

The event kicks off bright and early at 9:00am with check-in starting at 8:30am. It’s being held at the Hendrix College Student Life & Technology Center.

Think Big Arkansas has a whole day of programming lined up including a startup alley exhibition area, a parade of startup ecosystem startups and partners, several sessions and of course Scott Case and Brad Feld. Case will be speaking at noon during lunch (bring $$ for Food Trucks and guided by Truckily) and Feld will be speaking at 6:30. He’ll also be signing copies of his book “Startup Communities”.

15 startups will be featured during the event in a startup alley, and demoing throughout. Kenny Tomlin from Rockfish and John James from Acumen will be speaking on starting up and the importance of serial entrepreneurship.

It’s not too late to register for this great event, click here.