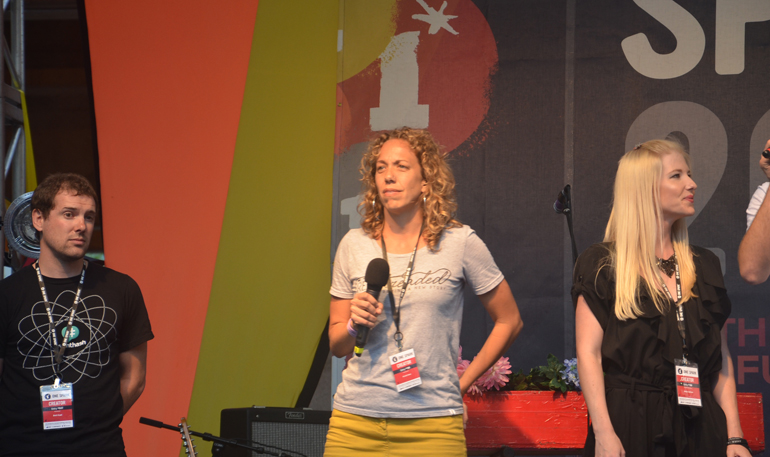 During the opening ceremonies, led by voice of the Jacksonville Jaguars, Brian Sexton, we were given a glimpse of what was to come. Sexton invited random creators to raise their hands and come up and pitch their creation, business or startup to the crowd. Each of the five creators had 90 seconds to deliver an on the spot pitch. One of those pitches was Kristin Keen the founder of Rethreaded.

Rethreaded is a social startup that puts women who’ve suffered some of the worst abuse known to humans, sex trafficking, human trafficking and prostitution, and gives them a new sense of life, and worth through business, artistry and employment. Keen spoke to the crowd with a genuine passion. She had spent five years of her life in India where she helped empower women who had suffered the same kind of abuse through teaching them to sew.

Keen told Florida’s First Coast News that when she got back home to Jacksonville she couldn’t sit still she wanted to do something to continue her mission, and that she did.

She started Rethreaded, which crafts children’s clothes out of used t-shirts. So not only is she putting women who need a lift up a place to work and be creative, but she’s also upcycling t-shirts.

Little did she know when she pitched her company on Wednesday afternoon that she would be the runaway vote leader at the end of the week. She also didn’t know what was in store for her just a few moments later. 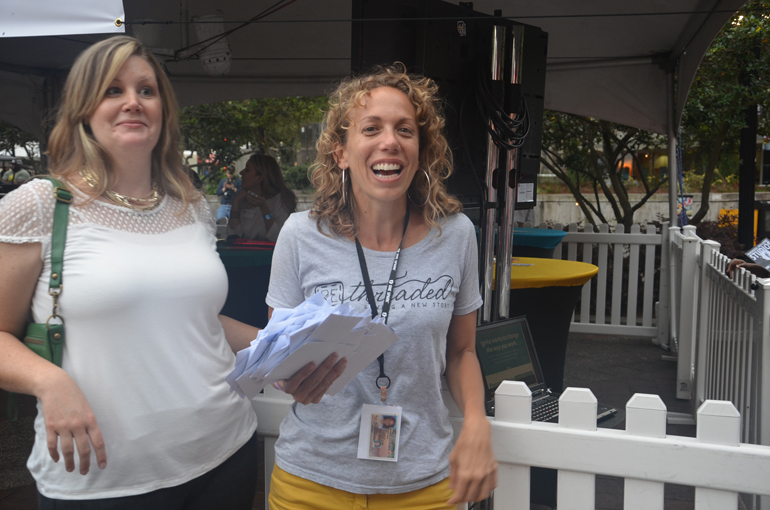 After all five creators had pitched, OneSpark volunteers handed out sealed white envelopes. Sexton informed the crowd that in those envelopes (which we weren’t allowed to look in) were $1 and $5 bills, $1000 dollars worth. The crowd was instructed to find the creators who just pitched outside of the creator lounge tent and hand over the envelope. Like me, many of the crowd didn’t even look in the envelopes.

I had made a core group of new friends at OneSpark and silently we all took our envelopes and walked over to find Kristin. We weren’t alone. She won that contest by a landslide. 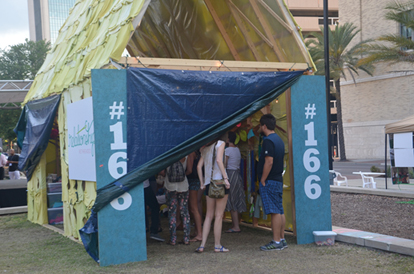 The OneSpark staff did daily updates at 5:30pm each evening to inform the crowd of who the biggest movers in voting were and sure enough on Saturday evening Rethreaded was the biggest mover.

Their OneSpark booth was a hut constructed out of used t-shirts, which made a great make-shift shelter when the rain came pouring down Saturday afternoon.

Keen was one of the greatest creators we met. She was extremely kind and humble and we’re pretty sure she wasn’t even expecting the win. I caught a glimpse of Keen in her hut on Saturday afternoon, tearing up telling a group of passerbys that she never expected the outpouring of support she received at OneSpark.

Naturally I was gunning for a tech startup to win the overall vote during the five days of crowd voting, but I couldn’t be more pleased that the top vote went to Kristin Keen and Re-Threaded, a social entrepreneur with a heart of gold. With the most votes, Rethreaded took home $6,768.42 of the $250,000 crowdfunding prize. Event registrants voted for one creator using the OneSpark app and the money was distributed evenly among the top vote getters.

You can see how genuine Keen is in her 90 second pitch below:

Find out more about Rethreaded here.