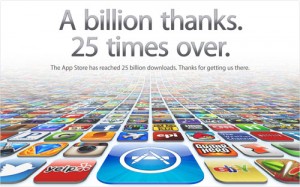 Something has happened and the world is undoubtedly all shaken up about it. Fiksu has reported that Apple iOS app downloads dipped 30% in March 2012. Yes, take cover, this is news of monumental proportion.

The number of daily iPhone app downloads decreased from 6.35 million in February 2012, to 4.45 million in March. Now we bravely wanted to suggest that it may have possibly been caused by the mad rush to get to 25 billion apps. Apple was holding a huge contest to commemorate that huge milestone. Unfortunately for the month of March, that happened on March 3rd.

This feeble attempt to look at the possible bright side was foiled by more data from Fiksu. They found that iPhone users downloaded fewer apps in March than any other month since the iPhone 4S launched in October.

Fiksu contributes part of the decline to the cooling off period that came right after the honeymoon period for new iPhone 4S users. Also, we can take into consideration those who upgraded from a previous iPhone. Upgraded iPhone users have probably used their previous iPhone to download and try as many apps as possible to vet the apps that they really like. Now, graduated to a new iPhone they don’t need to download every app they come in contact with.

Business Insider also reports that Apple has cracked down on developers using third party bots to download their apps and over inflate their number of downloads. This may actually be a more clear picture of the health of the iTunes app store. Don’t for a second though, think that 4.5 million downloads is shabby.