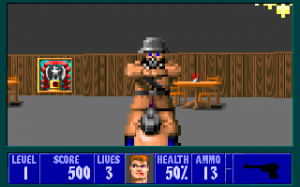 This is something that may make some people feel old, Wolfenstein 3D, turned 20 years old recently. To commemorate the event, Bethesda Software, has released the full version of the game as a free in-browser game, which can be found here.

Wolfenstein 3D was the brainchild of John Carmack of id Software, and is seen to many as one of the first FPS games that really brought the genre to the masses on PCs everywhere. The free in-browser game contains all three levels of the game, and all four difficulties.

While Wolfenstein was one the first hits that id Software has on its hands, it was by no means the only hit that they had. A year later John Carmack along with John Romero had another hit on their hands with DOOM.

How many people are excited to go back through the original Castle Wolfenstein and fend off the Nazi soldiers, attack dogs, and the mutant monsters?

View all articles by Damien R