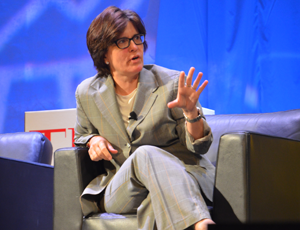 We are in Chicago this week for the Startup America regions summit for Startup America Champions. We’re actually attending as Champions rather than media. Our good friend Frank Gruber at TechCocktail is also attending the summit as a regional champion from Washington DC.

While we did a little bit of actual work at the summit for the most part it’s been a great learning experience. In fact, when I tried to continue working after lunch, Startup America CEO Scott Case personally came and got me to make sure I was learning and not working. All the sessions on Tuesday were definitely worth it.

That doesn’t mean we couldn’t work at night after the summit was over.

Case drove home many of the important points from his talk earlier in the day at the Startup America summit. He also went into a little history of AOL and briefly talked about the Time Warner merger.

After Case cleared the stage, they introduced the next guest (which we hadn’t read the program so we didn’t know) Kara Swisher.

Swisher is an authority on startups, technology and silicon valley. She was one of the reporters featured prominently in the 60 minutes interview with Mark Zuckerberg and she, along with Walt Mossberg, head up AllThingsDigital.  She’s a great interviewer and an equally as good interviewee.

Most of the interview was in true Swisher banter, great down to earth, and real tech talk sprinkled with her signature humor. In fact one of the funniest points in her talk was when she made reference to the fact that she’s been married to a Google executive for 14 years, Swisher than pointed out that she is a lesbian (which she’s always been out), and in “straight years” that would be 97 years of marriage.

She referred to Google Glasses as “creep glasses” and Google+ as not a social network.

At the end of the interview (the part in the video below) she was asked what she thought the next big thing would be. Her answer may surprise you, and again, even this answer was full of humor, that’s for the most part true: