One of the joys of having a five year old daughter is all of the things we can do together to promote the idea of Santa Claus. For the past few years, one of those things is sitting on daddy’s lap on Christmas eve and tracking Santa Claus as he makes his way around the world on Google Earth and Google Maps.  Just last year my daughter started developing an interest in geography which makes the experience a lot more fun and educational.

Two Christmases ago Google also began a service utilizing their Google Voice product that allowed users to set up a call for the child or children in their life to receive an actual phone call/voice mail message from Santa Claus.

Well we learned Wednesday by way of searchengineland.com that Norad has decided to switch their mapping and tracking partner from Google to Microsoft and Bing. Apparently Old Saint Nick took the Bing challenge and Bing won.

NORAD is switching to Bing Maps for their 2D tracking. They are also taking on a new partner in a company called Celsium, that will provide 3D tracking, the way that Google Earth did. 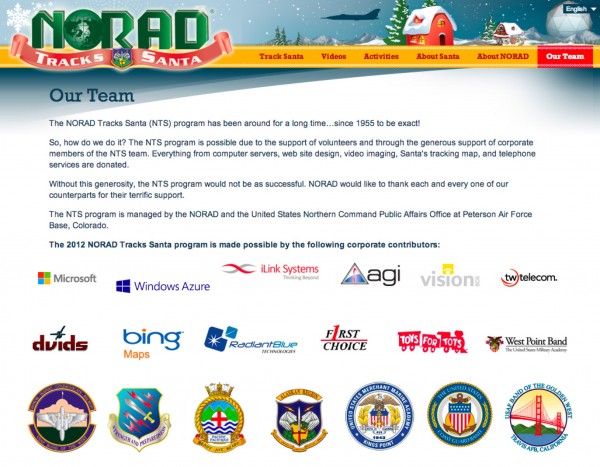 Of course this is a huge win for Microsoft having a customer like Norad to do such an important task.  Google wasn’t entirely left out though as Norad will still use YouTube.  Facebook and Twitter are also still in the mix.

This year Microsoft is partnering with NORAD to make following the big red sleigh easier than ever. The Santa Tracker tool is built on the Microsoft Windows Azure cloud computing platform and Bing Maps, and anxious kids can even track Kris Kringle on Windows Phone and Windows 8 apps.

Google supported NTS [NORAD Tracks Santa] from 2007-2011 and helped increase NTS program awareness across the globe; NORAD is grateful for the partnership and the resulting success.  This year, NTS and Google mutually agreed to go in new directions, and we are excited to welcome a number of new contributors, to include Microsoft, Windows Azure, Bing, and iLink-systems, among others, to help us in our mission of tracking Santa.  The ability to work with a diverse team of contributors is fundamental to the NTS mission, and we appreciate all of the continued support of all contributors.

At this point in time we’re just happy NORAD didn’t decide to go with Apple Maps, afterall the presents need to get to their children’s houses.

Are you headed to everywhereelse.co the largest startup conference in the U.S.?