If you’re not familiar with the term Xoogler it’s a relatively new term that ex-Google employees have come up for themselves, as in Ex-Googler. In 2012 Mashable featured 15 start ups that were founded by Xooglers. Many of the start ups were re-hashments of 20% projects. Google was known for allowing employees to work on projects that weren’t part of their daily work for 20% of their work week.

While Google had first dibs at 20% projects some of the ideas that came out were either not picked up by Google, or just developed totally outside of Google.

Such is the case for Anshuman Bapna. Bapna worked in Google’s advertising department and handled major accounts with a focus on travel. He had travel industry experience before working at Google and left the search giant to develop mygola.com.  The website mygola.com takes a different spin on travel by having hired travel advisers recommend travel destinations and give advice on places to go, one on one but in an open forum. Instead of a corporate structure that puts dollars before travel, mygola offers the end user information first. It’s fueled by industry partnerships and of course advertising vs bookings. 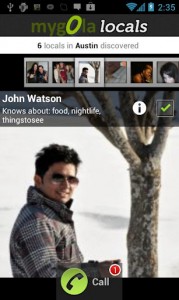 Bapna wanted to get into the mobile space but didn’t want to offer just another hotel booking app or flight booking app. Bapna wanted to offer a resource for people once they got into a strange city or destination. That’s where Mygola Locals came up.

MyGola Locals has sourced ordinary English speaking people in international destinations and even here in the U.S. These people have signed up to be “locals”. As a local their profile and phone number go into the apps data base and when someone gets to a new destination they can actually call someone, free of charge, to get advice on anything from restaurants, to the best way to get from the airport to the hotel.

Bapna wanted to use an actual phone conversation vs texting or messaging because it opens up a whole new form of interaction. Also, in areas where people aren’t familiar, a friendly voice can be relaxing to someone, especially in a foreign country.

MyGola Locals uses an anonymizing call switcher/dialer that calls all the locals in a queue until someone picks up. When they do pick up the end user talks to them on the phone and sees their photo along with key profile information.

The MyGola locals system also allows the “locals” to set times, dates, and hours that they are available. Some locals may be more comfortable recommending night life from say 10pm-2am while others may be available in the morning. This insures that the end user doesn’t wake someone up or interrupt them while they are working.

Bapna set up his first U.S. market in Austin Texas for South By Southwest the past two weeks. He told us in an interview that plenty of people were using the service, in fact more than he originally thought. I had the opportunity to try it out. In a town full of food trucks and barbecue I was looking for the best burger around and found a few good recommendations of sit-down restaurants that were pleasing. The local even took my phone number and texted me later in the day to make sure I had found his first recommendation.

Bapna was hoping to build scale from out of town users to become locals in their own town, which also worked out better than planned.

If you’re ready to try it, here’s a link to MyGola Locals in the Google Play Store.