Unless you’re a technology startup, most small businesses don’t have the luxury of having a designer on staff. This can become a real pain for business owners when they need their own internal websites, or intranets, created.

Business owners could try and find a developer but that can prove to be a costly process. There are also plenty of do it yourself web building tools. Papyrs takes the ease of creation one step further by allowing the creator to simply drag and drop widges for files, discussions, social media,forms and more.

“Papyrs is in between a wiki and a database. And users don’t have to know anything about (markup) languages or technology. It’s all really pretty intuitive.” co-founder Diederik van Houten told nibletz.com in an interview.

“We tried a lot of products to help us collect, organize, and search through all our business information (the standard mix of Word and Excel documents, and email becomes painful quickly) but none of the existing products out there hit the sweet spot.  We understand that an intranet should be built (mostly) by the people who use it daily: different companies have different needs, and the users know what they need for their job. So Papyrs allows people to easily drag&drop the widgets they need onto a page to solve the problems they have during their day. And with Papyrs you can find everything back instantly because we have great search and intuitive navigation between pages.” van Houten said. 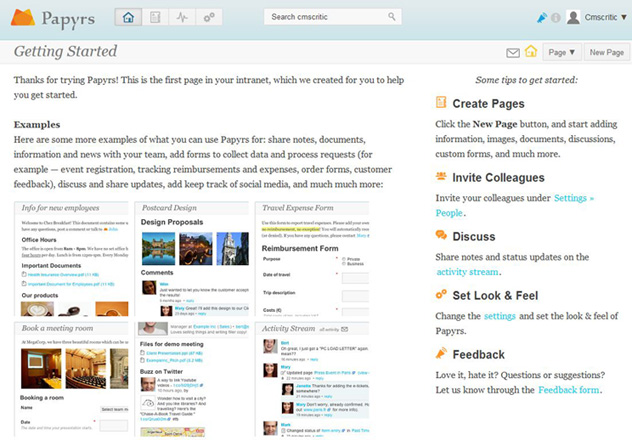 There are plenty of quick website building platforms out there but most deal in templates. Papyrs allows the creator to get a little more creative and utilize more resources that may already exist in the company, like forms, and other creative elements.

Automation and measurement are what really set Papyrs apart from similar platforms. van Houten added “The trick is to automate the right things. It’s easy to waste a day automating a task that cost 5 minutes a week. It’s also easy to postpone automating something that doesn’t feel like a big drain on your time or attention, but is.”

“Measurement is critical because our intuitions are often wrong and sometimes *really* wrong. It’s easy to spend a week or more working on a feature nobody cares about. So nowadays we collect anonymous statistics This makes it much easier to make decisions. In the absence of good data we tend to debate the pros and cons of the different approaches in front of us. With enough data we can skip the debate and make the right decision immediately.”

We just integrated Papyrs with Zapier, launched the Papyrs API, created functionality for Importing data from Backpack, made user activity graphs available to our larger customers and more.

There are a number of things on the road map, but we’re not giving out the specifics just yet. We’re working on improvements Papyrs Forms, we’re going to add a few frequently requested widgets and we’re working on an Affiliate program. This way our users can make some money by recommending Papyrs to friends and colleagues in other organizations.

Where can people find out more

You can read more about Papyrs on the website www.papyrs.com, and we have a company blog www.stunf.com. Finally, we tweet @stunf. We love to talk to people from the startup community and aspiring entrepreneurs. So if you just want to say hello or grab a coffee with one of us, just let us know at team@stunf.com.