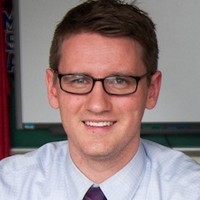 On Tuesday at SXSW we got the chance to catch the premiere of the Startup Weekend Edu documentary. The movie chronicles two startups, one from the east coast and one from the west, going through the 54 hour startup weekend program.

Kevin Tame, a former math teacher at Booker T Washington middle school in Baltimore Maryland discovered a simple problem that needed fixing. Students, and teachers were wasting too much time logging in to multiple applications.

Tame, a Teach For America teacher at the time, was fortunate enough to have 1:1 iPads for his students at Booker T. Washington. He found that he spent the first 4-10 minutes of every class helping students get logged in to whatever application they were using.

Unbeknownst to him at the time, Clever (who actually won the LAUNCHedu competition) discovered the same problem and was working on it at the same time.

Tame’s startup for Startup Weekend EDU, “Student Dashboard” was picked to build at the New York City event and pitched that Sunday evening. While Tame’s team didn’t win there were valuable lessons taught and learned during the process.

We got a chance to catch up with Tame on Wednesday at SXSWedu. Check out our interview below: