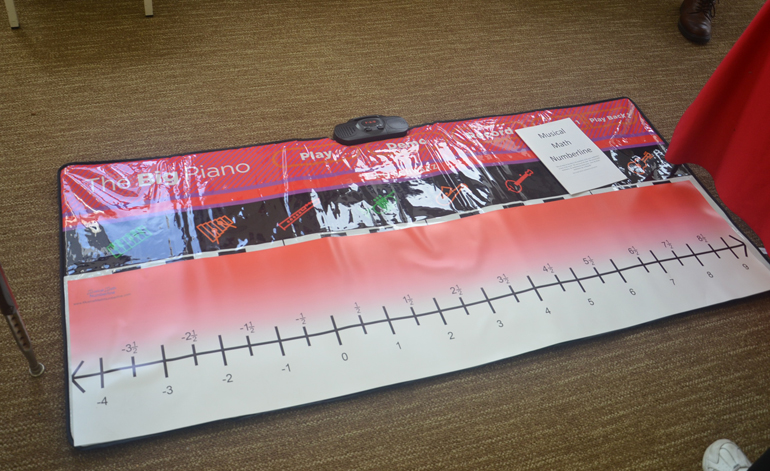 Florida teacher turned entrepreneur Deb Bowers has an innovative, musical way to teach students adding and subtracting positive and negative numbers. She’s put it all to music and song using one of FAO Schwartz most popular toys.

Long gone are the days that one has to travel all the way to New York City to see FAO Schwartz signature toys. You know the ones made famous by many New York based Christmas movies including Home Alone. Toys-R-Us has created an FAO Schwartz section in all of their stores and one of their most popular toys from the brand is a gigantic piano kids can walk and jump on.Think Nintendo power pad meets keyboard.

Well Bowers has created a way to use that piano toy, affix a number chart on top and teach kids to add and subtract positive and negative numbers, while performing a song.

Musical Math Numberline comes with everything a parent needs to teach this method at home, except for the piano itself. You can either order it from Bowers’ site via a link to Toys R Us or go to your local Toys R us and pick it up. The numberline comes with the overlay for the piano along with a song book that is filled not only with songs, but songs composed by performing math problems.

To get the entire gist of the idea you should watch the video below. Bowers said she got the idea from her students. She would put masking tape on the floor and have them move about the front of the room adding and subtracting positive and negative numbers. Some students suggested that there had to be a way they could add music to it, so Bowers did.

She just showed off the idea at OneSpark the World’s Crowdfunding Festival where she hoped to get a jump start on bringing the company out to a bigger market. She told us there were lots of interested people that came to see her at her booth and that she was going to continue with Musical Math Numberline regardless of whether she was one of the companies to get funded at the event.

Check out the video below. You can find out more at musicalmathnumberline.com

Here are even more startup stories from OneSpark!