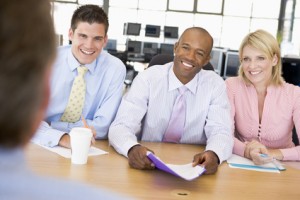 Have you seen “Shark Tank” yet? For entrepreneurs, it’s one of the best reality TV shows. Cable and satellite packages start at around $30 per month, according to www.directtvdeal.com. “Shark Tank” has five investors that are selected to sit on a stage that listen to entrepreneurs pitch their products and business ideas. After their pitch, the sharks decide whether or not they will be given money to fund their business ideas.

In the process, the entrepreneurs are asked a barrage of questions, sometimes humiliated, often laughed at, occasionally insulted and generally traumatized. Some of the sharks include Mark Cuban, real estate mogul Barbara Corcoran, Kevin O’Leary, who created and sold “The Learning Company” to Mattel for $3.2 billion, FUBU clothing founder Daymond John and comedian Jeff Foxworthy. Despite the hostile atmosphere created by the sharks, participants could walk away from the experience with a big, fat check if one or more of the Sharks believe their business idea is a good one. Lessons can be learned from “Shark Tank” for entrepreneurs:

When an entrepreneur makes their pitch, reactions from the sharks can be pretty telling. If it’s an Internet-related idea and Mark Cuban doesn’t like it, no deal. If a clothing idea is rejected by Mr. FUBU, chances are the designer will be sent back to the drawing board. If an idea geared toward an infomercial is rejected by the infomercial expert, it’s back to square one. You can’t be all things to all people, but you should know your target audience and connect with them.

Coming from a place of truly enjoying what you do is key, and the sharks pick up on it. One investor came in with just an idea — a medicine dropper in the shape of an elephant for kids — and won investment dollars. AVA the Elephant is now sold in 10,000 stores in 10 countries. Founder Tiffany Krumins used her passion for helping kids to create a successful business.

Find a need and create a great product to fill that need. ReaderRest Magnetic Glasses Holders from season three is one of the show’s most successful products. It calls itself a “simple solution for eyewear management problems” and allows the user to keep their glasses safely and securely within reach using magnets that automatically attach and self-center. Overall, sales went quickly from $65,000 to $5.5 million after the show.

You don’t have to reinvent the wheel to be successful; you just have to make a better wheel. BBQ sauce is nothing new, but sales of season one’s Pork Barrel BBQ sauces and rubs went from $5,000 to $3.5 million after their investment. Jamba Juice bought season three’s Talbott Teas in 2012. Both products took an ordinary item to the next level, doing it better than their competitors.

Sell the Dream, not Numbers

Some entrepreneurs start working their pitch with statements like, “I sold X amount of my product last year.” These people tend to get the worst deals from the sharks, or none at all. Sometimes the sharks don’t seem to care about numbers like $1 million in past sales, i.e. games2u.com, an excellent company that got no deal. Past numbers do not sell — the dream does.