We get 100’s of pitches for coverage a day, especially on Monday’s and Tuesdays for some reason. As most of you know though, we are very committed to our mission of being “the voice of startups everywhere else” so we try to go through each and every coverage pitch, as quickly as we possibly can.

We get a lot of startup pitches from Silicon Valley. I left it out of the image above because it made it too obvious who wrote it, but this person is from San Francisco. We typically explain that we are “the voice of startups everywhere else” and as such we don’t cover Silicon Valley. If I’ve got a little extra time I may refer the startup to one of the several startup focused publications in the Valley.  I am typically nice when we get a Valley pitch, but some things just grind my gears.

Don’t lie to the journalist or blogger you’re emailing.

Don’t flat out lie to a journalist, don’t say that you’ve read their work or their site if you haven’t. This makes me think back to a story a colleague of mine told me while we were producing Thedroidguy. She worked for one of the majors as an analyst and  would regularly get emails talking about how much the pitcher enjoyed the stories they wrote. They never wrote any stories. But, their email address was easily accessible via Google and the junk mail poured in.

In our case I can understand some people getting confused about “everywhere else.” There’s a huge difference between a PR person or startup marketer who says they saw or read a specific piece or knew about a feature, but didn’t realize exactly what “voice of startups everywhere else” actually means.  Then there are others too lazy to do any research or look at a website, so they fire off bulk emails.

We love Mailchimp, and we use it to reach our readers with event information, newsletters, and more. Mailchimp and services like it are great, but not for your PR pitch, especially if you’re pitching your own startup. Your startup is your baby; it’s a part of you. Can you convey that through a form email? Instead, connect with a journalist in a new way, do a couple of seconds of Google research, and take a second to fire off your target a somewhat personalized note.

The guy above violated both of the above two rules, and you can see from the graphic just how much. Pure laziness.

Remember who had your back in the beginning.

While Nibletz is growing very quickly, we know we’re not the biggest dog in the pack. There are a handful of blogs ahead of us and a bunch below us. Coverage from the big names is helpful, but don’t forget the sites that actually talked to you in the beginning.

Maybe you have a great deal set up to give TechCrunch a runway (an exclusive period of time on an embargoed press release). You could easily give that smaller site that supported you early a secondary runway or the story a little bit ahead of time so they can write a bigger piece.

Relationships are very important in any business, especially this one.

Google has made it harder to reach most writers 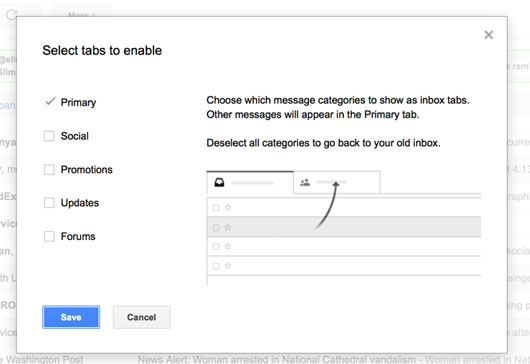 Last week Google unveiled their new inbox tabs. This new feature allows you to have tabs for primary, social, promotions, updates, and forums. Ideally this makes it easier to get to inbox 0, and for that it is effective. It didn’t work out for me, because important emails were getting thrown into other buckets so I quickly did away with the tabs (see the graphic above).

That makes a personal connection or a relationship even more important. Now it’s mandatory to personalize your email messages.

With that I’ll tell you the story about my favorite email from the last year or so. California startup MyStorey had been pitching me quite some time on covering their startup. It was a busy time of year; I planned on covering them, but they kept getting pushed back. I know that can be frustrating.

Well, their marketing person had some big news, Rudy Gay, formerly of the Memphis Grizzlies (and now the Toronto Raptors) inked a deal with their startup to be featured as one of their celebrities. The startup allows people to see and then purchase items celebrities wear.

The guy at MyStorey had done enough digging to find out that I was both a Memphis Grizzlies fan (and season ticket holder) and from Baltimore, so a serious Rudy Gay fan, regardless of the trade. I was tweeting pictures from a Memphis Grizzlies game on my personal Twitter account, excited because the Grizzlies won. Rudy Gay was still on the team and had 20 points that night.

As I was walking out of the FedExForum on December 4th at 10:00pm, the startup wrote to me talking about Rudy Gay’s performance in that game. The next day they got the story.  The information they had was easy to find, and they utilized it to strengthen our relationship, which led to coverage.

You don’t have to be that guy above. Take a little time to do some research, send journalists personal emails, and remember where you came from.