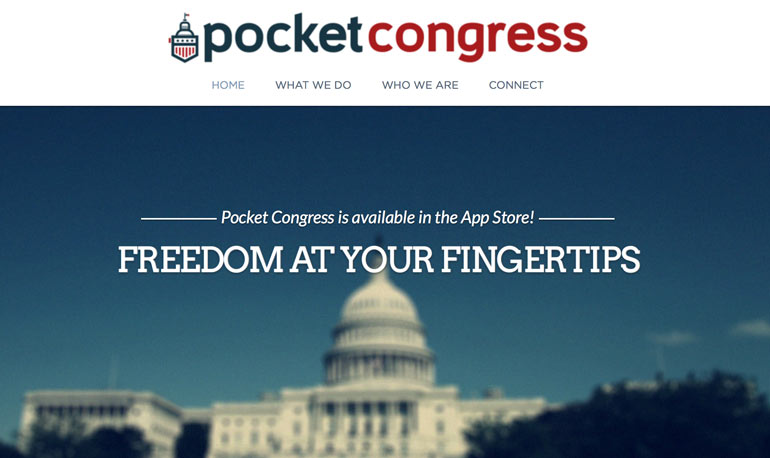 With smartphones in the pockets of tens of millions of people, information is extremely easy to obtain. You don’t even need to wait to get home to check something on the internet. You just reach into your pocket and hit Google or whatever your favorite information source is.

The information age, the internet age ,and now the mobile age has made government more accessible, and with that accessibility becomes accountability. Long gone are the days that any Congressman or other elected official can just sneak something passed the people.  When a bill is before Congress, voted on, or signed, you can find all the information about it online. You can look it up on your phone as well.

Now a Nashville Startup called PocketCongress is looking to streamline all that information into an easy-to-use app.  SouthernAlpha reports that David Swift was watching the news one night and wanted to look up further information on some legislation that was just reported on. He found the process of finding that information more cumbersome than he thought it should be. To make it easier he created PocketCongress.

We talk with Swift in the interview below.

We are an easily accessible research tool for Congressional information. Search various ways in both legislation and legislator fields.

I, David Swift, am a local business owner in Nashville and am constantly looking to become more involved in the tech world. I concocted this idea in early 2011 and refined it over the next few years. In August of last year, I connected with an old high school classmate, Joey Vadala. Joey is a long-time techie and computer genius, even since the high school days. He’s built a few apps and I was impressed. Looking for someone who would build the app for profit equity AND pull off a simplistic, usable UI/UX, Joey was a great fit. Joey absolutely crushed the fine design details and construction of the app. I handle the business aspect of things, marketing, etc. and Joey is working on 2.0 for Pocket Congress.

Fantastic. There’s a lot of old money here, nearly all of it concentrated on the health care industry. That tide is slowly turning with all kinds of tech start ups popping up here and there. The new building of the Entrepreneur Center is magnifying a lot of start ups that wouldn’t get the attention otherwise.

We solve the lack of true government transparency and the inability for the casual news-watcher to gather any real content on what’s being reported on their TV, what’s being voted on in their capital, and ultimately what’s affecting their lives on a daily basis. The entire concept of Pocket Congress is to further true government transparency and to aid in involving the casual political observer. The app is easy enough to navigate for a casual news watcher, but has enough information for a political junkie. The information is out there and is researchable, but not easily and quickly. Pocket Congress allows not only quick research & reference, but also tracking of legislation and social sharing of all information. Real government accountability and transparency must be done by the people, not the government.

Our app searches both Members and Legislation. In Members, one can search via: current location, name, ZIP code, committee, state, or browse. In Legislation, one can search via: HOT bills, number, locally sponsored, keyword, recent actions, and type. You can read actual legislation via .pdf. Anyone can interact with local senators and representatives by easily accessing their Twitter feed, biography, district map, committees, and all their social media outlets. One of my favorite features is the ability to tweet directly to a senator, send them an email, or call their office directly from the app.

We need it now more than ever. (How many times have you heard that?) There are now more iPhone users in existence now than ever before. As a country, that’s more ready access than has ever been provided in the past. Never has Congressional members and the legislation they pass been so easy to access and share. Our phones are always with us, so an app is truly the timeliest way to access this type of information and a real vehicle for government transparency.

A segment on Mike Huckabee on FOX. We have a connection to him particularly, as I worked with him personally on his last book signing tour over a course of three weeks. He’s a large government transparency advocate. We would then like to leverage that appearance to other media outlets, including other politically-charged TV shows.