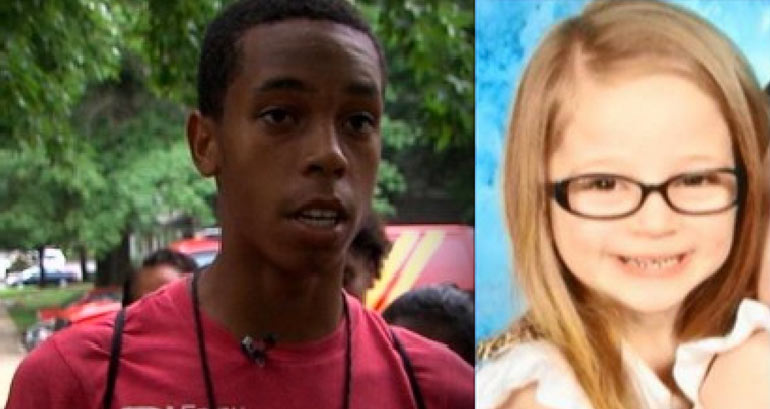 Back in July a 5 year old girl named Jocelyn Rojas was abducted from her Lancaster, Pennsylvania home. Meanwhile an incoming freshman, 15-year-old Temar Boggs, was helping a neighbor move a couch into her home. While they were moving the couch, Rojas’ mother hysterically asked them of they had seen her daughter. Boggs and friend Chris Garcia immediately joined the search for the little girl by foot.

Many sites, like the Huffington Post, reported that the two teenage boys thought it would be more effective to continue the search on their bikes.  The neighborhood they all live in is filled with dead ends and strange cul-de-sacs. The local police were already on the scene and congregating at some of the intersections in the neighborhood. This made the abductor drive in and out of the backstreets and look very suspicious.

Boggs saw that suspicious maroon car and kept up with it on his bike for 15 minutes, eventually making eye contact with the suspect and the little girl. The suspect eventually wanted to flee and knew his cover was blown, so he pushed the little girl out of the passenger seat. She ran straight to Boggs. Many news outlets report that once in Boggs’ arms, the young Rojas didn’t want to leave the boy’s protection. He eventually convinced her that it was safe to go with the police.

If you choked up a bit during this story, you did the same thing as Mary O’Donnell, a complete stranger from Dunkirk, New York.

“I just felt like, ‘God, I would love to do something for these kids’,” O’Donnell told Lancaster Online by phone. “And I figured there were probably lots of other people who felt the same way.”

She jumped into action, launching a college fund campaign on popular crowdfunding website Indiegogo. Now we typically cover Indiegogo when someone is creating a new and exciting gadget or product. We’ve even used Indiegogo to crowdfund our sneaker strapped startup road trip. But after seeing how easy it was for O’Donnell to put some action where her mouth was, we found this story about crowdfunding to be an amazing one.

O’Donnell set out to raise $10,000 which she planned to give to Boggs and Garcia’s families for college. However, four days after putting up the site it was already over-funded. In fact with 23 days left, as we publish this story there is well over $15,000 raised. It looks like they’ll have no problem clearing $25,000.

Right about the same time David Reed, a 59-year-old retired pilot from Missouri also established a fund for the boys. He is hoping to raise $100,000.

“I’m sure that’s a lucky expectation, but with the cost of college these days, I figured it would be great to help them out. They certainly deserve it,” Reed said in an interview. His fund has raised over $2500 to date.

Tamika Boggs, Temar’s mother, has also set up a scholarship fund in Lancaster, Pennsylvania. More information on that can be found here.

Crowdfunding will be a hot topic at this national startup conference.