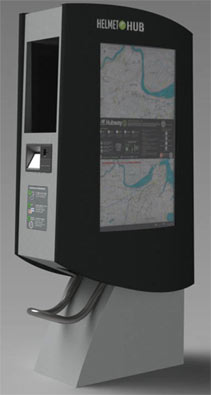 Bike sharing is becoming the in thing when it comes to green transportation in most major cities. Boston, New York, Chicago, Washington DC, Atlanta, and several West Coast cities all have significant bike share programs in place. Bike sharing allows users to “rent” a bike using an automated kiosk. In most cases you can rent the bike for the day at one location and return it at a different location, kind of like Red Box.

Bike sharing is perfect for when it’s pouring down rain in the morning but brightens up by lunch time or after work. You wouldn’t schlep your bike to work in the rain, but having a bike share kiosk near by means that you can get some exercise in the afternoon if the weather permits.

One of the hurdles that bike share programs have encountered is safety, and more specifically helmets. Whether it’s a matter of law or just people conscious about protecting their noggin, helmets are a significant barrier to people bike sharing. Sure you could go buy a helmet and carry it in a backpack, but at that point you might as well buy your own bike, get a lock, and forget the bike sharing concept all together.

Two Boston entrepreneurs, Breanna Berry and Chris Mills, are hoping to solve the helmet problem by making helmets as easy to rent as bikes.

The two have developed a kiosk called HelmetHub that allows users to swipe a credit card and rent a helmet for $2 per day to go along with the bike they just rented. To test out the service, HelmetHub is being installed in four locations alongside bike sharing kiosks. When a rider rents a bike they can pick up the helmet and be on their way. According to the Boston Herald, users rent their helmets from one side of the machine and return them to another. This keeps the used helmets separate from the sterilized helmets. Each helmet is cleaned and sterilized between uses.

“It’ll be the first real automated bike helmet vending machine in the world,” said Nicole Freedman, Boston’s so-called bike czar who heads the city’s Boston Bikes program. “What we want to do with HelmetHub is make helmets as convenient as renting the bikes.”
Berry told the Herald that she hopes that HelmetHub goes well in Boston so that they can branch out to the other cities offering bike share services.
Find out more about HelmetHub at helmet-hub.com