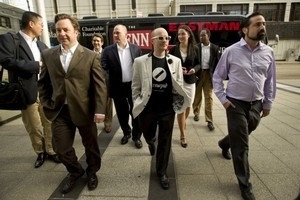 Every startup accelerator everywhere else wishes they could have participation at demo day from their top industry leaders. While some of their leading companies may have a presence at demo day, the real influencers are often too busy to attend a four hour demo day. With this problem in mind, Tennessee had a great idea for their startups: bring them to those companies.

The master accelerator program, called The TENN, was put on by Launch Tennessee, the public/private partnership spearheading the accelerator efforts across Tennessee. Launch Tennessee partnered with the Blackstone Foundation to put the program on, as well as other key state sponsors.

Twenty accelerator graduates that wrapped up their programs by August of this year competed in a final pitch off in Nashville on August 27th. At that event a group of judges from outside of Tennessee had the daunting task of narrowing down those 20 to just 10 for the road show.

In addition to going on the road in a wrapped tour bus, each of the companies received $10,000 for their business and will have access to office space at their accelerator’s office space, or they will receive a subsidy for space they may already occupy.

The ten companies chosen were:

Health & Bliss had to drop out of the roadshow due to a scheduling conflict. They were replaced by Chattanooga startup HutGrip.

The roadshow kicked off in the Tri-Cities area with stops at Eastman Chemical and AccelNow. On Tuesday the bus made its way to Knoxville, where they stopped at Scripps Networks and the Knoxville Entrepreneur Center. Wednesday the bus stopped in Chattanooga at Society of Work. Thursday the group traveled to Nashville and the Nashville Entrepreneur Center. The trip wrapped up in Memphis on Friday with stops at First Tennessee Bank and FedEx.

The ten companies will continue working on their businesses and with mentors and corporate leaders across the state.

You can find out more about The TENN at TheTENN.org