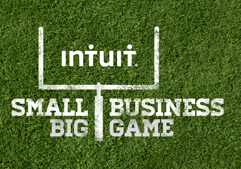 The contest, which Intuit calls the Intuit Small Business Big Game, kicked off in August when all those interested in entering had to inspire the folks at Intuit and everyday people across the globe. That round narrowed nearly 100,000 entries down to just 10,000.

The next step in the Small Business Big Game Challenge will have Intuit’s 8500 employees and then a judging panel, narrow those 20 companies down to just four.

In November Intuit will reopen voting globally for the world to vote on the final four contestants in the Small Business Big Game. The company with the most votes will be chosen as the winner and receive a professionally produced television commercial to air on the national telecast of the Super Bowl in February.

The Super Bowl commercial will put the winner in front of over 100 million viewers, many who actually watch the game for the commercials. Last year’s Super Bowl fell just shy of the record for the most watched television program in history and was the third highest rated Super Bowl of all time.

You can stay up to date with Intuit’s Small Business Big Game here.

That’s not the only big thing for startups in February check this out.