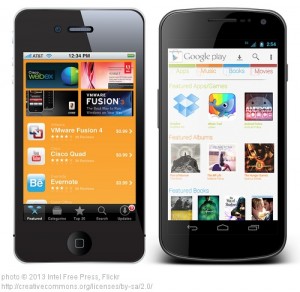 By now most of us are aware that the future of the Internet is in mobile. According to the Pew Research Center, 56% of Americans have a cell phone. Well over half of them use their phones to access the Internet, and a full 34% use their phones for Internet access more often than they do a desktop or laptop. Worldwide, it is estimated there are already more than 1 billion smartphones in use, and that number’s growing.

That’s the definition of a big market.

Given the $1 billion dollar sale of Instagram to Facebook, you might expect social or photos to have raised the most money. They did garner 4% and 3% each, which is nothing to sneeze at, with numbers that big. However, the biggest winners this quarter were customer relationship management, business analytics, and mobile payments. These three combined garnered 1/5 of all the deals closed.

Who are the VC’s doling out this money? CB Insights looked at mobile deals for the whole year, and 500 Startups comes out on top as the most active mobile investor with 20 deals closed so far this year. Andreesen Horowitz and Google Ventures round out the top three.

This quarter marks the first time mobile deals surpassed those for healthcare. However, mobile-focused healthcare startups still netted 4% of that $1.12 billion.

Our phones and tablets have already become less like novelty devices and more like sturdy workhorse for our work and personal lives. This quarter may mark the first time VC financing reaches $1 billion, but we’re guessing it won’t be the last.

Read the whole CB Insights report and tell us what you think.