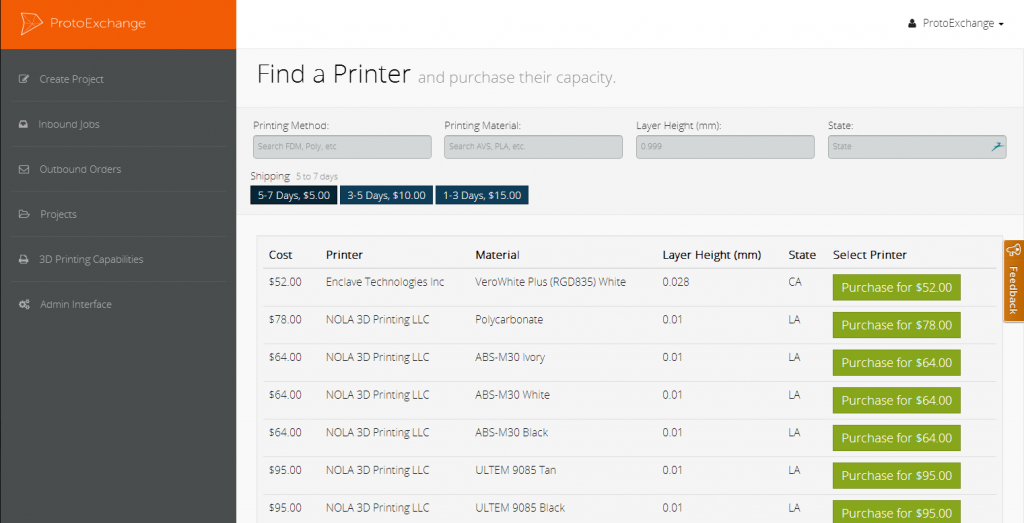 There’s nothing like procrastination to spark a startup idea.

In college, Jonathan Placa waited too long to get started on a project, and when he needed something manufactured through Shapeways, they had a 4-6 week lead time. With the project due in 3 days, Placa obviously missed the deadline.

Nonetheless, one bad grade is a small price to pay for the next great idea. After he missed his deadline, Placa talked the problem out with his roommate Orie Steele.

What if there was a whole network of 3D printers that could manufacture any project in a day’s time?

What would the platform look like and how would it work?

How awesome would it be for all engineering procrastinators in the years to come?!

(Now, I wasn’t there, but in my head this conversation sounds a lot like the “We should buy a BAR!” episode of How I Met Your Mother. Puzzles, anyone?)

Anyway, there’s a good chance it was less effusive than that, and the guys behind ProtoExchange actually thought through their business idea. They brought on Placa’s brother Jimmy to run the financial side of things. Jimmy had a background in finance, but he also ran a traditional manufacturing company, which gave the team a little bit of market insight.

They also moved from New York to Texas to participate in the first cohort of Techstars Austin.

Basically, ProtoExchange connects smaller manufacturers onto a national platform, giving them a wider network with which to compete against bigger manufacturers. For the consumer, it means they can access a large network of 3D printers and shorten the time it takes to receive their product.

The first working 3D printer was created in 1984, but in the last few years the idea has taken off. The rise of cloud computing now makes it simple to download and share any documents or plans, so 3D printing is becoming even more accessible to the average user.

Techstars Austin gave the ProtoExchange team a great start, and they are now working hard to build the network and platform, which should be available publicly soon. Placa assured me they currently have all the major 3D printing technologies and materials and are ready to compete with more established, centralized services.

The accelerator even introduced them to some current housemates who also moved to Austin to start up. Currently, they earn revenue on transaction fees, but they are also experimenting with other financial models.

ProtoExchange will soon be available to procrastinating students everywhere. You can follow them on Twitter for all the updates.