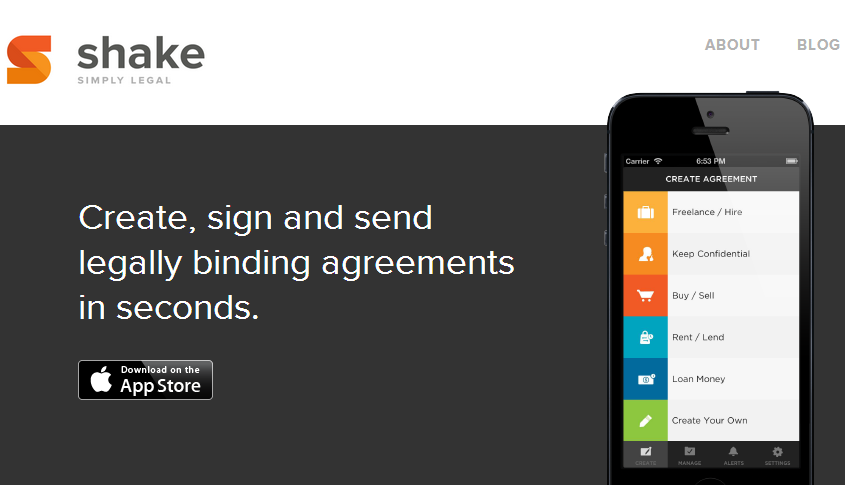 If you work with contractors (or freelance on the side), you know what a pain those contracts can be. You’re always worried about the language being just right, or you never have a copy when you need one.

New York-based Shake is changing that for you. The company has developed an iOS app with standard legal templates, written in plain English. You can download the template in the app and use e-signature technology to close the deal. All from the coffeeshop of your choice.

Shake’s found, Abe Geiger, had some experience doing contract work himself, so he understood the frustrations. His co-founders Jon Steinberg (President & COO of Buzzfeed) and Jared Grusd (General Counsel at Spotify) experienced the frustration from a different point of view. As executives in big companies, they wanted an easier way to work with their contractors, without making life harder for the freelancers.

So they founded Shake in 2012. Steinberg and Grusd remained at their companies and took board seats at Shake, while Geiger built out operations.

The goal of Shake is to make peer-to-peer deals light, simple, and easy to understand.

With that in mind, the company’s Chief Legal Officer Vinay Jain, and his team of law students, translate all standard contracts into plain English. Geiger told me it took them 9 months to get the first batch of templates ready because they were so focused on getting all the wording just right.

We asked him if the contracts would hold up in court, but he pointed out that most peer-to-peer deals are so small, they rarely end up in court.

“Getting things in writing in plain English decreases disagreements,” he pointed out.

Last week the company announced a $3 million Series A round, led by SoftBank Capital.

“The economy is shifting such that small businesses and freelancers are doing more business than ever, and they need to be able to make simple but effective legal agreements on the go,” Jordy Levy, Managing Partner at SoftBank Capital, said in a statement. Levy will join Shake’s board.

Currently, Shake has an iOS app with several simple templates. They plan to use the new capital to expand their template bank, build out web and Android platforms, and hire some great talent.