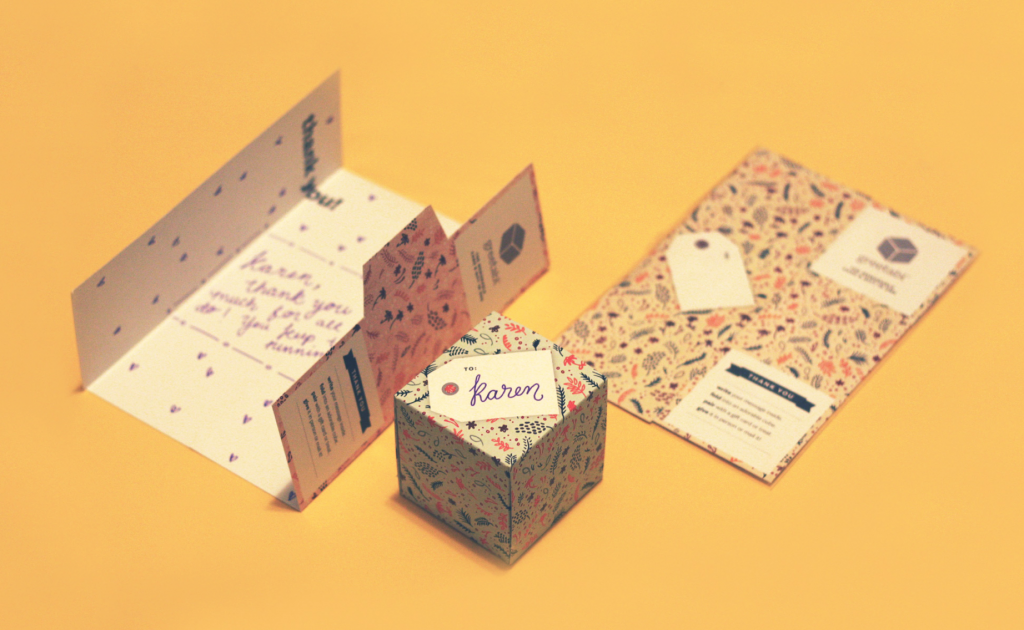 Most people send others cards or gifts for special occasions, birthdays, etc. Some people also use the adage of ‘thinking outside the box’ from time to time.

One guy, Joe Fischer, thought outside the box and made a card that turned into a box. This box could, you guessed it, also hold small gifts or presents. In other words, he did it all, and he called it Greetabl.

The story begins as Fischer’s traveling back and forth between England and India for work. Upon taking some time off to recover from a shoulder surgery, he begins alternating between sitting around watching TV and sitting around trying to sleep upright in a reclining chair, at which point he realizes that he “just had so much time.” So he began tinkering.

“A couple good friends of mine were getting married at the time. I usually just wrote a handwritten card and sent them a check.”

But it wasn’t fun. It was cardboard, paper, and ink, a combination that, almost regardless of how you configure it, was essentially the same each and every time.

The aha moments came twice: the first with the concept and the second with the design.

“It’s a lot more fun to get a gift than just getting an envelope.” And so he created a prototype for his first Greetabl cube. Folded up and stamped, he sent it to his mother. That prototype soon arrived in his mom’s mailbox, complete with a note from the mailwoman simply saying, “Too cute! :)”

And that was it. Paired with reactions from friends and family and the postal worker’s praises, Fischer knew he had to go for it.

“If this ugly thing could garner that kind of a reaction from someone who took time out of their work day, what if it was really well designed, adorable-looking, and it came from somebody you love? What kind of impact could that have on that relationship?”

So he created more prototypes, most of which would make it quite difficult for the sender to actually write their message on the eventual card-turned-cube. But then the design struck.

“It was one of those times when I was basically just driving down the road and thought, ‘What if I did it like that?’ And I had to run home and try it. But it worked!”

The rest was history. If you haven’t seen Greetabls on shelves near you yet, keep an eye out. “Gifts are just more fun,” he says.

And I would agree. Be sure to visit greetabl.com to get your own Greetabl and break the monotony of sending cards you know end up being thrown in the recycling bin, and follow @greetabl on Twitter!

The “Must-Attend Conference for Entrepreneurs” Everywhere Else Tennessee is headed back to Memphis this Spring. We’ve released the early adopter tickets, and they’re going fast. Don’t miss your shot by signing up here!