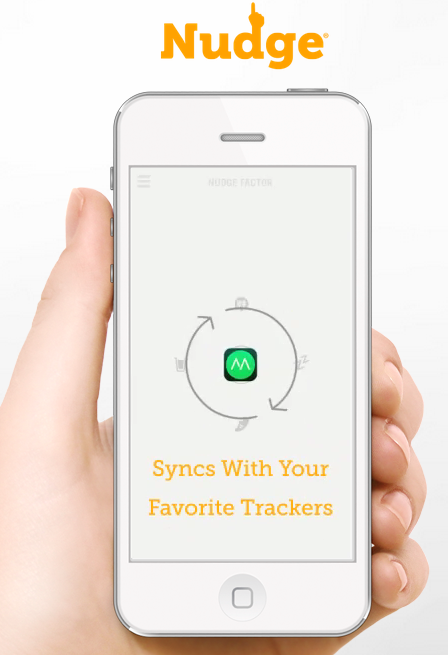 Fitness apps. Sleep apps. Wearables tracking our every move. The market is full (and growing!) of products designed to helps us get and stay healthy.

But when you’re tracking all that data across several apps, it can be hard to see the big picture. What efforts are actually moving you toward your fitness goals? Are you actually getting and staying healthy with all this effort?

That’s where Nudge comes in. They’ve integrated with several top fitness apps to provide one platform and score for all that data, helping you know easily and quickly if your efforts are doing any good.

Check out our Q&A with Nudge below:

Nudge connects your favorite health tracking apps and gadgets in one app, giving you one score for your whole healthy lifestyle—the Nudge Factor.

The Nudge Factor is a 30-day snapshot of how healthy you’re living from 0-110. The algorithm indexes hydration, nutrition, exercise and sleep data to provide a single, simple feedback system for health tracking. While simple tracking can be done manually, Nudge was not created to compete as a health tracker, but rather to unify the health tracking market under a single feedback system while allowing consumers to continue using the apps and gadgets they already use to track individual inputs.

3) What’s the story behind your idea?

The B2B experiment helped us identify factors plaguing adoption of similar platforms in the space:

We saw our opportunity to use the Nudge Factor to bring health trackers together in one place by unifying the health tracking market under a single feedback system, without competing as a health tracker. We pivoted, integrated with popular apps like RunKeeper, Moves and MapMyFitness, and re-launched in mid-December.

4) Who are the founders?

Nudge originally was founded in 2011 by Wofford College graduates Phil Beene and Mac Gambill during their stint playing semi-professional soccer in Chattanooga, Tenn. for the Chattanooga Football Club. At the time, Phil was managing caretakers, and client-care services at Maxim Healthcare, while Mac was working as a group and individual sports and fitness trainer, and doing sales for D1 Sports. After the platform’s conception, the two brought on Chris Garson, a backend web developer with mobile app experience and a masters in Biomedical Engineering from The University of Virginia. Chris officially joined when he returned from traveling southeast Asia with his wife and working on projects as an independent software developer.

Subsequently, the team was introduced to Russ Campbell while working with a local design shop in Chattanooga. Russ’ experience leading design initiatives for organizations like Griffin Technologies and Gibson Guitars perfectly complemented the skill-sets of the founding team and made Russ an obvious addition to round out the leadership team. Russ joined Nudge on a full-time basis in Q4 of 2013.

5) Where are you located?

Richmond has a rapid growing startup scene with awesome companies beginning to make a splash in their respective fields. Several accelerators and early stage investment groups like 80amps and New Richmond Ventures have launched that have begun to lay the foundation in ensuring success, amongst the latest wave of local startups. Companies like Coffitivity achieving Time Magazine’s Top 50 websites, and PlanG raising significant early investment have served as the catalyst for the tech startup movement in Richmond.

7) What milestones have you reached?

In the first month after relaunch we have already surpassed 10,000 sign-ups, and we have begun piloting our revenue model with several partner brands.

8) What are your next milestones?

Some of the upcoming milestones we have on the timeline include launching our revenue model in the second quarter after several months of testing, as well as a user milestone of 50,000.

9) Where can people find out more?

Check us out at www.nudgeyourself.com, or search for “Nudge” in the app stores.