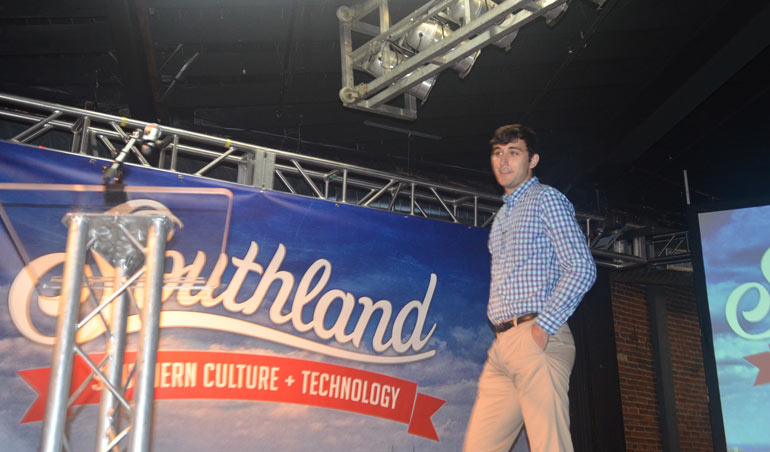 On Wednesday, Chattanooga transplant startup Banyan was selected to pitch on stage as part of the Southland Summit in Nashville. You may remember Banyan; they won the entrepreneur track at the GigTank demo day last summer and took home $100,000 dollars. Although it wasn’t a condition of receiving their prize, the Banyan team–Toni Gamayel, Travis Staton, and TJ Weigel–decided to relocate their startup from Florida to Chattanooga late last year.

Banyan billed itself as a collaborative research tool that could handle enormous amounts of data. They were the only GigTank participant that really talked about the effects of 1gb ethernet and big data during last year’s Demo Day. To make his point, the company’s pitch man, Gamayel, point it this way: To take two terrabytes of data from Stanford to London, it would be faster to get on a plane with two hard drives than it would be with conventional Internet speeds. In contrast,  Chattanooga’s 1gb ethernet pipe would allow that data to transmit in just four hours.

During the Southland pitch Gamayel revealed that scientific research hasn’t fundamentally changed since the 1700’s. Even in present day scientists have a really hard time collaborating because they need to keep control of their authorship. Gamayel also said that universities are very protective of their researchers as well. Gamayel pointed to a case where Stanford University lost $50 million dollars when they couldn’t clearly state whether or not a professor worked on a certain piece of research under his university role or independently.

The newest iteration of Banyan solves all of these problems. For starters they’ve added profiles for scientists and researchers on the system. Scientists can clearly list their accolades and achievements, skills, and research they’ve authored. There is also the base tool for collaboration as well as a way to leave comments and feedback. Finally Banyan has incorporated a system that can time and date stamp each iteration of the research and correctly credit the author. So in that case at Stanford, it would be clear whose “time” the professor was on.

Although we thought Gamayel did a fine job pitching their exciting product, he was a little hard on himself, stating after the pitch that it was the first time that he’s talked about the new features to a large audience, with some of their investors in the crowd.

Banyan is a fascinating product and is sure to continue changing the way researchers and scientists work. Check out Gamayel’s Southland pitch below.

Here’s more of our Southland Coverage at nibletz.com

Jacksonville just recently held a Startup Weekend event. The event, like most Startup Weekends, brought hordes of entrepreneurs, hackers, developers and designers together under one roof to build companies over a 54 hour period.

Jennifer Chapman, was one of those entrepreneurs.

She had an idea called “Pinstitute” an online education platform taking the concepts behind sites like Skillshare and applying them to Pinterest. Basically, a platform to buy and sell online classes to make the cool stuff you see on Pinterest.

“I’m relieved, I’m excited, I’m a little anxious that I’m about to take on this amazing new venture,” Chapman said after her first-place win reports the Jacksonville Business Journal. “This is amazing, it’s been an awesome experience.”

Co-founder of Banyan, and new Chattanooga resident, Toni Gemayel, was one of the judges for the Jacksonville event, giving some great advice to Chapman, “Don’t let anyone leave here with your idea”.

Unfortunately that’s what somebody did. Chapman couldn’t afford the $3800 for the premium Pinstitute domain name, and by the end of Startup Weekend, someone at the event had shelled out the money for it, someone not on her team.

“That was disappointing to hear that somebody would do that,” said Todd Smith, one of the event’s five judges. “At the end of the day, it’s the person with the vision and the execution who is the real entrepreneur.”

In the end it looks like Chapman will move forward with the idea, perhaps under a different domain. File this one under total douchebag. 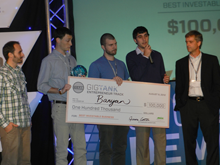 Over 500 people came from across Tennessee and across the USA to Chattanooga TN Wednesday and Thursday for GigTank’s Demo Day.

GigTank is a 90 day accelerator program based in Chattanooga with an emphasis on using Chattanoga’s 1GBPS internet. Chattanooga was the first city in the United States (edging out Kansas City and Google by a year), to implement 1gbps internet. Every resident and business in a 600 square mile radius has 1gbps fiber optic line straight to their home or business.

Chattanooga was able to set up the 1gb fiber by rolling out a smart grid that provides communications from utility meters at every home and business back to a central location. Citizens of Chattanooga can elect to get data and tv services from the 1gb fiber pipe in their homes on a monthly subscription based model.

Chattanooga’s GigTank accelerator featured two separate tracks. The entrepreneur track was a traditional 3 month accelerator model with a seed investment, and access to services, mentors, office space and other resources. The student track was similar to the entrepreneur track but without the seed investment. Students participated in a pitch contest in Chattanooga Thursday where they competed for a $50,000 prize.

The winner of the entrepreneur track was a Tampa Florida startup called Banyan. The Banyan team was Toni Gamayel, Travis Staton and TJ Weigel.

Banyan is a cloud based collaborative research system. This allows researchers who are working on the same project to keep their research together. It also solves major pains for those managing the research.

During Gamayel’s pitch he brought up an instance where two students at the University of Kentucky were working on the same exact research one floor above each other and didn’t even know it. With Banyan the research manager would have easily been able to identify this duplicate research.

In another instance a Stanford professor had been working on some research. The need arose to validate that the particular research he was working on was being performed at the school rather than at home or another lab. With Banyan they could have easily identified the source of the actual research.

Banyan took a $100,000 check back to Tampa where they plan on using it to beef up their development and marketing. Gamayel is very active in the Tampa startup community. He was a judge for a recent Startup Weekend in Florida and is well known as a resource and mentor in the region. In fact he has provided mentorship to Feathr a Gainesville based startup that is working on eliminating the paper business card.

Check out Banyan’s complete pitch below:

Here’s more of our GigTank coverage

Love what we do, click here, do it, RT, Repeat