Startups pitching at stadiums seems to be a really cool thing this year. Startups in Indianapolis pitched at Lucas Oil Field during the PowderKeg startup event earlier this fall. The graduating class at the Brandery in Cincinnati pitched at the Great American Ball Park where the Cincinnati Reds play, for investor day. Last week Startup Texas hosted a statewide competition at Cowboy Stadium.

The pitch contest, which pitted startups across the entire state of Texas, gave startups the chance to pitch in front of Startup Texas, Startup America and influential entrepreneurial leaders like Steve Case (Founder of AOL), Scott Case (Founding CTO at Priceline) and Carl Sparks (CEO at Travelocity). The winning team won a consultation with one of the three iconic leaders, facilitated by the Startup America Partnership.

Austin startup Heyride was the overall winner in the competition. Heyride is a peer to peer ride sharing app, which is a hot space right now.  Users are able to find on demand rides from drivers based on competing offers. The app gives the user the option of riding or driving and it’s peer to peer, so presumably less expensive than Uber or Taxi Magic.

Ridesharing is huge overseas and there are several startups popping up across the country like Greenville SC startup RidePost which completed the Iron Yard accelerator program back in August.

Heyride has prepared itself for the hurdles they could face operating a ride sharing startup and dealing with the public at larges. It was recently reported that private car hailing startup Uber, had a Washington DC based driver accused or Rape, last week. 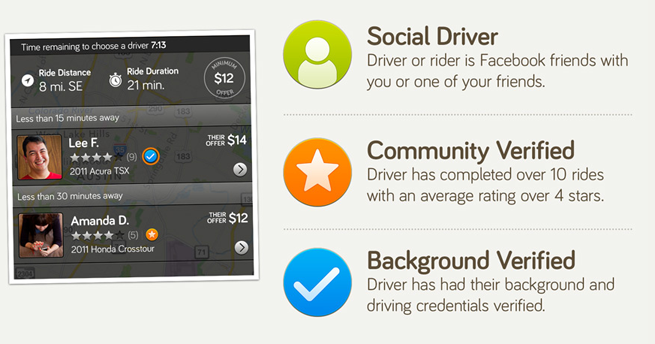 Heyride offers three types of driver verification including social drivers, community verified drivers and background verified drivers. In a driver’s profile, the level of verification that they’ve completed can be found in an icon next to their name, giving riders a better piece of mind.

Of course drivers are also star rated so that the more successful rides they give the better their rating.

The company has also developed a payment conduit which allows the rider and driver to exchange a frictionless and cashless payment at the onset of the ride so that they don’t have to haggle about price at the end.. It’s also safer for both the riders and the drivers to not have to carry cash.

Heyride is currently only available in Austin Texas which should be great for the tens of thousands converging on the city in March for SXSW.  They do plan on expanding outside of Austin eventually.

everywhereelse.co The Startup Conference is the largest startup conference in the U.S.