Woofound is a Baltimore based startup in the recommendation space. Since we hail from Baltimore and Philly, this is exciting news for our area, and of course “everywhere else”.

Woofound matches your personality to things you want to do. Woofound was actually built in conjunction with psychoanalyst and psychotherapist Dr. Noreen Honeycutt from Baltimore Maryland. This is actually the second startup in just as many days that we’ve reported on that dives much deeper than the surface to serve up recommendations or discoveries. The first was London based ColourDNA which uses the psychology of colours in it’s discovery platform. 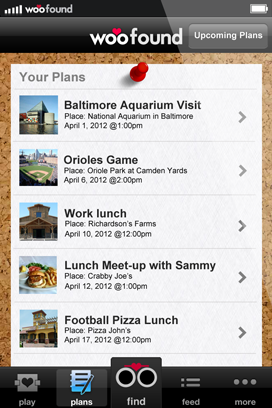 Our friend Sarah Pereze over at TechCrunch reports that Woofound co-founders Dan Sines and Josh Spears founded the company last year after Spears was set up on a blind date. The two friends thought, wouldn’t it be great if there was a way to match up interests based on personality traits?

Like Parking Panda, (another Baltimore startup) Woofound’s launch centers around Baltimore and DC, however today’s launch brings online the 70 top metro markets. Perez pointed out that most of the recommendations in her hometown of Tampa were things she was already familiar with. I had much better luck in Atlanta this early morning.

There’s not much mention of how deep the personality integration goes however they are going to develop a version of Woofound for the Univesity of Maryland Baltimore County (UMBC) that will help students with career path goals.

The interface is nice and it has this simple feel to it. The user simply rates things “Me or Not Me” reminiscent of the hot or not days.

The iOS version launched today with Android in the coming months.