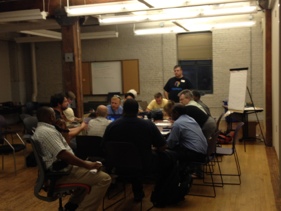 As the voice of Startups everywhere else we spend quite a lot of time at hackathon style startup competitions. You know the type,two or three day build a startup weekends. In fact there’s an international organization called Startup Weekend that hosts a lot of the events we really enjoy covering.

Now let’s preface this and say these tips are from the last ten events Cameron, Brent and I have attended and or judged, and not the two events we are at this weekend.

Timing Is Everything
In most weekend long startup competitions the first day starts with rapid fire pitches. From there they are whittled down to a handful of ideas that will be developed over the weekend period. The rapid fire idea pitches are between 2 and 5 minutes. That’s certainly not a lot of time. Make sure your pitch is concise and you don’t sound like the micro machine man.

Cut To The Chase
You don’t have a lot of time to pitch. Jump right into the idea first and do the background stats second. It’s ok to run out of time rattling off statistics that many have probably heard before. If you start with the stats upfront,you may not have enough time to actually get the idea out there. If you run out of time on the idea, your startup has very little chance of getting produced.

Build The Startup During The Contest
Keep in mind these are “weekend pitch contest tips”.
If you have your pitch deck done, a product in beta or at least a concept built,a weekend hackathon style contest isn’t the place. You need what we call in these parts, a networking event.

To me there is nothing less classy then signing up for a startup weekend event, pitching a product just about done that may need a designer or two or a marketer, or an investor and then leaving when your idea doesn’t get picked. Network, help others that aren’t as far along as you are.

Mark’s Mango Smoothie Shop or Toms Tshirt manufacturer isn’t a “startup” most startup weekend style events are looking for businesses that can go from idea to proof of concept in 48, 54 or 72 hours.

The Team That Works Around The Clock Will Probably Win
I’ve only seen two startup weekend style events where the teams didn’t have at least the option of working all weekend long. If you had a great idea and so did Tom and you went home and Toms team stayed all night, when you get back in the morning don’t be surprised if they already have social media streams, an alpha shell and feedback from four major companies. That’s just the way it goes.

Do Your Research
If you’re going to make a claim in your pitch that you have the first ever this or the first ever that,do some research. When judging contests I’ll give you the benefit of the doubt if I can’t find your concept ten pages back in Google search results. However if your idea is on the first page in the Google Results within the first two results, FAIL.

Pay It Forward
Last night at the launch for 48 Hour Launch in Memphis folks from Friendsignia, Paytopia, Work For Pie and other local companies who have either been through 48 Hour Launch or Seed Hatchery were there. They joined teams and they are mentoring and helping. Especially “everywhere else” you need to stick together. Take a look at St.Louis. St.Louis native Jim McKelvy, best known for being a co-founder of Square, is constantly reinvesting in St. Louis.