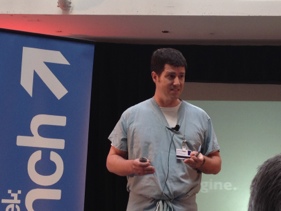 Monday at Chicago TechWeek was Startup City day. 34 Startups from Chicago and everywhere else participated in an expo day and Launch competition.

The finalists in the contest were narrowed down by their startup overall. The panel of judge combed the exhibit floor early on in the day and then selected four finalists. A fifth finalist came from popular vote by attendees. Attendees of the Startup City expo were given a card when they went in and told to put their card in the jar of the startup they liked the best. We thought it was a good system but apparently flawed in talking with over 50 attendees none of them had even seen the booth for Biz Inject the startup that had supposedly won the popular vote. Even worse during the judges Q&A the founder had trouble conceptualizing his concept in pitch form….

The other four startups selected were great by our standards. They were all fresh innovative ideas, with great pitches. The other four finalists were GDine, Mouse House, SafeSnips and Pretty Quick.

GDine is revolutionizing the way people dine in groups. Using GDines platform users can enjoy similar benefits to “Restaurant Week” year round. Groups can choose menus from participating restaurants, split the check and pay in advance. GDine has already received $650,000 in funding, and released last March, The service is already available in Chicago and Ne York.

The company founded said that with only 30 restaurants on board in New York as well as the fact that they’ve only been in New York a couple months, New York is pacing to pass Chicago,

Mouse House I love it when I learn cool totally off the wall things. With Mouse House I did just that. This startup has revolutionized the way Mice ponds are tracked and kept up with in labs,

Traditionally mice are kept in groups in cages with index cards on the front of the cage and data updated by hand. Mouse House puts the information in an iPad app. This new app greatly cuts down on the time of the administration of keeping up with the mice and frees scientists up to spend more time experimenting.

this startup was founded by a former employee of also Loreal who discovered the problem she was solving when a plane she was to take from France back to the states was delayed 2 hours. As she said in her pitch, she had two hours to be by herself and do something for herself.

She wanted to get her nails done and find somewhere in the airport or close by to do that, and book an appointment on short notice.

SafeSnips would fall into the medical devices category. The team behind SafeSnips has developed a technology that will be implemented onto surgical cutting instruments. Using near infra red technology SafeSnips will make cutting safer and less likely to accidentally cut arteries which can be fatal.

SafeSnips had one of the most innovative ideas. Since they are incorporating their technology into existing medical devices they don’t expect FDA approval to take very long.

On top of their innovative technology they had a great and enthusiastic pitch. During the Q&A session during the finals the pitchman for SafeSnips didn’t miss a beat while answering the questions. Obviously these factors played into SafeSnips being the winner of the TechWeek launch competition.

Find out more about SafeSnips here at their website

Nibletz is the voice of Startups “everywhere else” and we could use your help, click here please