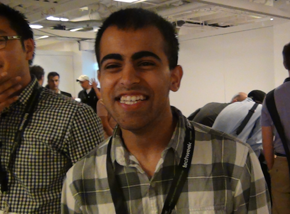 LineChop Co-Founder Nishanth Samala is all smiles about getting rid of the wait list (photo: nibletz)

Being placed on a waiting list at a restaurant can be one of the most frustrating things in the world. You don’t want to stand around and do nothing, but you don’t want to leave the restaurant in fear that you may miss your call for a seat.

Earlier this month we brought you the story about Pittsburgh startup NoWait, and how they’re providing a turnkey iOS based system for restaurants to manage their waiting list. While at TechWeek in Chicago we met this young group of guys who are still in college, and plan on disrupting the wait list as well.

As LineChop’s co-founder Nishanth Samala told us though, LineChop is different form NoWait because it doesn’t require any specific hardware. The system, for lack of a better word, is cloud based. Samala was quick to point out that a host or hostess at a restaurant could run LineChop on their existing computer, an iPad or other tablet.

The other thing that sets LineChop apart is that they’re plan from the get go is to offer coupons and deals to  those customers that are waiting in line.

LineChop has a text or messaging based feature which will allow patrons to be notified when their spot in line is available or they can get notified via the LineChop app.

Check out our video below with Samala who’s very excited about the prospects for his startup:

Help a brother out