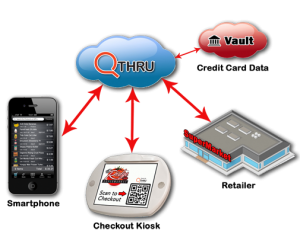 The startup’s founder, Aaron Roberts, grew tired of waiting in checkout lines, so he developed an app for that. Qthru allows the user to scan the barcodes of their grocery items with their smartphone creating a “shopping cart” while they go. As the user scans and puts the groceries into their cart, the app keeps a running tally for the total.

Roberts even figured in the necessity of the scale, so at their beta testing store in The Seattle area, they integrated a barcode printer for weighable items.

When the user is finished shopping they scan their phone at a kiosk and then enter their pin into the app which initiates the payment with the card tied to Qthru. A store employee looks over the groceries and the customer is ready to go.

Qthru is being tested at the Snoqualmie IGA store which is owned by Tyler Myers. Myers owns four more IGA store and a hardware store as well.


At first Myers was concerned about theft but quickly found out that with the employee checking through the groceries when the customer leaves, shoplifting is nearly impossible. Myers has been a big proponent of the Qthru system and has even offered Roberts feature ideas for the app.

“There’s a lot to be done with coupon and suggestive selling,” Myers told the Seattle Business Journal

Myers has suggested that Qthru could offer customers suggestions for wines and other things that would compliment the items already in their carts and offer a discount with them. He also suggested that the system could let a customer know if there is a cheaper alternative to the item they just bought, for example if the customer scanned Coke products and it was Pepsi week.

The beta test is near completion and the app is just about ready to upload to the iTunes store. Roberts promises and Android version and Windows Phone version as well.

Did you know about this? We could use your help!