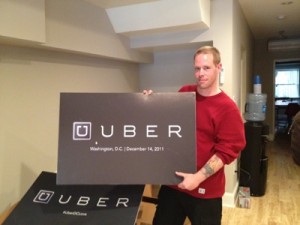 Please before you fire off a hate mail telling us that Uber is based in San Francisco (The Valley) we know this already. Since Uber expanded outside of the Valley to “everywhere else” we’ve written about Uber on occasion. They are really great people, and each city office is a corporately owned office, they are actually run more like franchises. Their Washgton DC and New York office are really good to us (disclosure Uber likes what we’re doing on our road trip and supplies us with uber cards when we are in their cities. They care about the rest of “everywhere else” like we do)

Uber’s says in this blog post, that they’ve had their legal team go over this with a fine tooth comb and they feel that they are not in any kind of violation. As such they plan on continuing to operate in Boston, despite the Cease & Desist, as they have since October 2011.

By the end of the day that had been squashed as locally based celebrities and even members of congress took to Twitter to defend Uber.

NBC’s Luke Russert took to Twitter to express his dismay:
“I’m willing to bet #DC cabbies after 12am will say, ‘cash only, no credit’ or claim that their credit machine ‘is broken.’” Russert tweeted earlier in the day.

After that public outcry on Twitter Cheh removed the Uber portion of that Taxi bill.

For now Bostonians, fear not as Uber is still in service until the Division of Standards comes with a better argument.