A startup in Brooklyn New York, called Kapture is turning people everywhere into brand ambassadors based on the photos they take with their smartphone cameras. Everyone loves sharing pictures over social media, now, when you’re snapping away, and you catch a brand, you could be rewarded.  Kapture is allowing new ways for retail brands, consumer goods, and other businesses to capitalize on pictures being taken of their products, services and businesses already.

When a user shares a Kapture moment with a social network like Facebook, or Twitter they can be instantly rewarded with items that range from discounts to physical goods. Rewards can be redeemed immediately or stock piled for a later date.

Michael Szewcyk, the co-founder and President of Kapture is no stranger to startups. In fact, he was working for a Silicon Valley based startup, Qwiki when he had the idea for Kapture. He quickly moved back to New York and began the launch process.

Kapture started last December with 25 businesses on board in the greater New York area. Rewards including things like a free glass of champagne for users who took a picture at Gansevoort Park’s rooftop Bar. Legendary ping pong club spin, offered a free drink to people who posted pictures of their game. 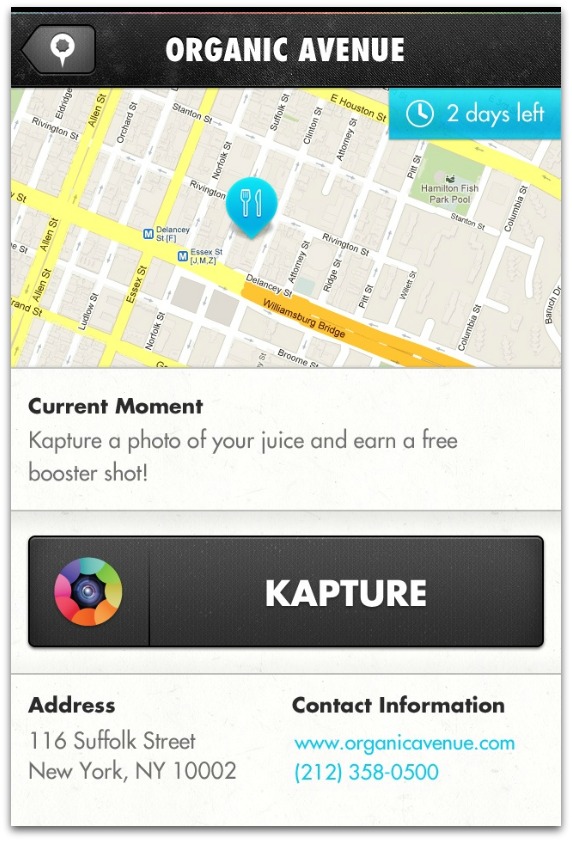 Kapture also makes it easy for people to find opportunities to earn rewards, which the startup conveniently calls “Photo Ops”. Within the iPhone app, users can find photo ops and then partake in the ones they want to get the prizes for.

We got a chance to talk with the Kapture team. Check out the interview below.

Kapture is a mobile application that instantly rewards individuals for taking and sharing photos of products and services they love with their friends via social media. Kapture turns anyone taking a photo into a brand ambassador, allowing merchants, businesses and brands to benefit from the billions of photos taken and shared monthly via social media. The Kapture platform especially empowers brands, as photos taken via Kapture are transformed into a beautiful Polaroid which prominently features the brand’s logo watermarked on the photo. For sharing a Kapture moment via Twitter or Facebook, users are instantly rewarded with items ranging from discounts to physical goods – which they can redeem instantly, save for redemption at a later date, or gift to their friends.

Take photos via Kapture of specific “moments” at designated merchants, brands and businesses.

These “moments” range from a particular purchase to a photo of décor in a store to a pose with a drink in hand.

You then share a Kapture moment via Twitter or Facebook to be instantly rewarded with items ranging from discounts to physical goods – which can be redeemed instantly, save for redemption at a later date or gift to their friends.

Kapture is located in Brooklyn

New York City and Brooklyn both have an amazing and thriving startup scene. Lots of companies in the space are solving big problems and doing big things, and we’re excited to be a part of this.

How did you come up with the idea for Kapture?

Kapture was born after wanting to receive more from the photos that you take and share with your friends.

Whether it’s a new outfit or your favorite entree, users are capturing the moments they share with their friends. The name made sense to us, and we put our own spin on it.

What problem does Kapture solve?

Kapture links brands with consumers. The platform turns anyone taking a photo through Kapture into a brand ambassador, allowing merchants, businesses and brands to benefit from the billions of photos taken and shared monthly via social media. The Kapture platform especially empowers brands, as photos taken via Kapture are transformed into a beautiful Polaroid which prominently features the brand’s logo watermarked on the photo.

Kapture takes an organic process that billions of people are used to doing on a daily basis, and we create a deeper connection to the brands and merchants that are part of people’s daily lives.

Building a team of absolutely amazing people is always a challenge for any startup, and we’ve been fortunate enough to get some of those people at Kapture – whether on an employee, investor, or advisory basis.

We’ve been fortunate to have some amazing mentors whether it’s Serkan Piantino of Facebook, to Alexandra Wilkis Wilson of Gilt Groupe.

Here are more startup interviews from “everywhere else”

Here’s the largest startup conference in the US