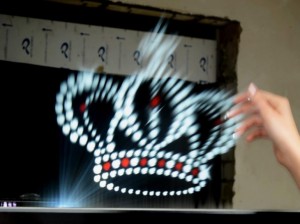 Imagine a world where you could just walk right up to something and right before your very eyes in the open air was a display. No monitor, no projector, just a display in the air. Now imagine if it was a multi-touch point display.  You’re not far off from visualizing Russian startup Displairs, display technology.

The founders of this Russian startup see the potential in 4 dimensional game play. They also see the technologies potential in advertising and marketing. They had impressed some of the people from Coca Cola who stopped by their booth at CES’ Eureka Park last week.

This is just the type of technology and startup that CEA was looking for when they set up Eureka Park last year. We saw some other wild tech this year as well like Tactus, a micro fluid technology that makes tactile keyboards just morph up from the screen of a smartphone or tablet device.

Check out our video interview below with Displair.

Join the over 2000 attendees who’ve purchased tickets to the largest startup conference in the U.S., everywhereelse.co The Startup Conference.