One thing’s for sure though, and that is that Juan Diego Calle, is Mr.DotCo. As the founder and CEO of .co, it was his vision that turned an old country top level domain into the top level domain that’s being used by startups and their support organizations across the country. In fact we use a .co for our annual conference and conference series, “everywhereelse.co The Startup Conference”.

On Friday at SXSW 2013, Calle celebrated his birthday with about 100 of his closest startup friends at a luncheon held at the Capital Factory. The celebration continued late into the night at Pete’s Piano Bar, where Calle was a great sport as the piano players roasted him. 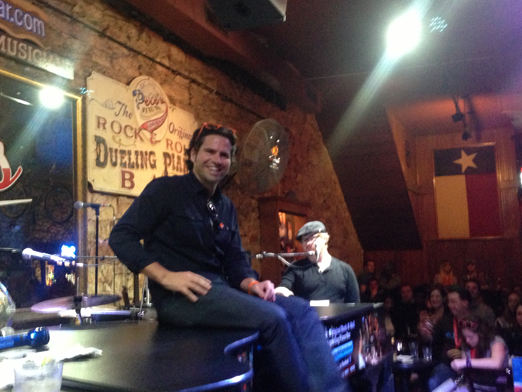 Calle celebrates his birthday with entrepreneurs, founders and Startup America by being roasted at Pete’s Dueling Piano Bar at SXSW

.co is actually the ccTLD for Colombia. Through a unique partnership and licensing agreement with Colombia, .co the company has become the official registrant for sites ending in .co. There are over 1 million domain names registered as .co and some of the biggest brands in the world, took advantage of single letter domains that .co had to offer. Of course there were only 26 of them and 9 of them are gone.

Google (g.c0), Twitter (t.co), Startup America (s.co) and Overstock.com (o.co) are just a few of the companies that have taken advantage of the single letter domain.

Calle is no stranger to entrepreneurship. The native of Colombia, grew up in a family of entrepreneurs in the beer and wine distribution business. When Calle was 15 though, his parents had him, his brother and his sister move to the United States for safety, while his family stayed back and ran the family business. He and his siblings’ first entrepreneurial roots came in the form of a car stereo installation company.

At age 22 he went for his first internet startup, a hybrid between goto.com and Askjeeves. That company succumbed to the internet bubble burst, but that didn’t deter Calle from continuing as an entrepreneur, and keeping the servers on at the company, TeRespondo. He eventually sold that company to Yahoo in 2005.

As for .co, before launching the registration company that is now known as .co, Calle commissioned a research study of the top level domain .co. 80% of the respondents thought that .co was short for company and 3% knew it stood for Colombia. The country Colombia soon realized there was opportunity to be had with the .co domain name but didn’t have the know how to execute a plan. Calle did, and he responded by providing an outline for all the problems that the country we need to overcome to start making money off the TLD.

“In addition to having very strict registration requirements, an ill-conceived effort to protect the country’s identity on the Internet resulted in the extension existing only in the third-level (for example, .com.co) prior to our administration,” Calle said. “It was also the reason why Colombia, the 30th largest economy in the world, with a population of 40 million, had only 28,000 .com.co domains registered as of February 6th, 2010.  There were 4 times more .coms registered by Colombians than .com.co’s!  If anything, the effort to protect the country’s internet identity through restrictive policy, was in fact killing it.” Calle said to dn journal in 2010

Calle ended up bidding on the administrative rights for the .co TLD and through a joint venture with Neustar Inc .co the company was born.  With the partnership in place Calle declared “Colombia is now a player on the internet”.

Calle is still operating as a startup. His small team is based in Miami where they handle the administration duties of the domain extension. They are also deeply entrenched in the startup scene. They quickly realized that .co was becoming a preferred extension of startups. They also entered into a partnership as a major sponsor of Startup America. Startup America’s website is s.co.

As an entrepreneur himself Calle gets excited talking with and hanging out with other entrepreneurs, which is why his entire birthday was spent doing just that.

He took a break from his luncheon festivities to talk with us in the video interview below.  For more information on .co visit go.co