We’ve been to a lot of startup conferences, festivals and events, and aside from the world famous SXSW, I’ve never seen a city so supportive of an event like this, especially a first time event. The entire city from the municipal government to the chamber of commerce and all of the agencies in between are truly engaged with OneSpark.

Police officers and Sheriff’s officers on loan to the downtown area, know where everything is, ask about creators, and projects and heck we’ve seen a few cops taking iPhone pictures for passerbys. In talking with some of the officers, they are all excited about OneSpark and what it means to downtown. “Big festivals and events like this usually happen across the bridge, OneSpark is great for downtown”, a Sheriff’s deputy who asked to remain nameless because he was on duty told us while we were walking toward Hemming Plaza.

One organization that you wouldn’t think would necessarily be involved in an event like OneSpark is “all in”, and that’s the NFL’s Jacksonville Jaguars.

The voice of the Jacksonville Jaguars, Brian Sexton, was the MC for the OneSpark opening ceremonies. While he talks for a living, on the stage at OneSpark he worked from a set of notes but you could easily tell that he knew all about OneSpark, adlibbing about the founders, the event and the creators. Sexton’s familiar voice to the resident’s of Jacksonville serves as another reminder that the whole community is all in.

Jaguars cheerleaders were also mingling throughout Hemming Plaza all afternoon long, even lending a boost to one of the presenters during the afternoon pitch sessions. 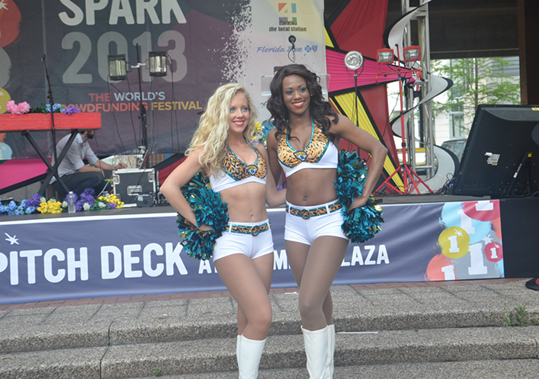 As part of the opening ceremonies the cheerleaders returned to the stage to accompany the Jaguars drum line who played a nice ten minute set to warm up the crowd, pep rally style.

Of course that’s just the beginning. Jaguars owner, Shahid “Shad” Khan, a local businessman and entrepreneur is notorious for supporting downtown causes. For OneSpark though his Stache Fund (a play on his signature moustache) has committed $1 million dollars to the event and the crowdfunding prize given out at the end of the festival based on voting.

Luckily for Jaguars fans we’re in the thick of the offseason, but nonetheless this isn’t just an “appearance” for anyone associated with the team, like the police officers, city councilmen and women and others, the Jaguars are all in for OneSpark.

We’ve got more OneSpark coverage here at nibletz.com The Voice Of Startups Everywhere Else.