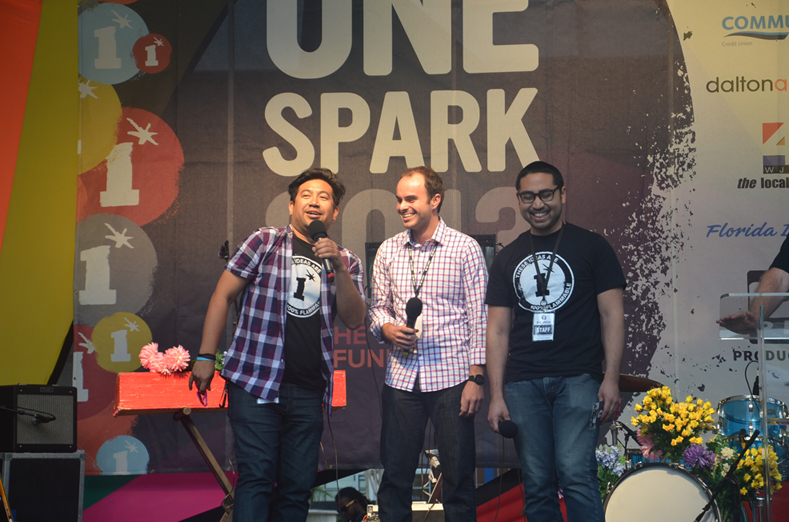 Two years ago three friends, businessmen, entrepreneurs and community minded guys sat around a Panera Bread talking about what they could do to help spark the startup community, and the creativity that comes with it, in Jacksonville Florida. Those three friends, Elton Rivas, Dennis Eusebio and Varick Rosete, set out to create an event that could serve as an ongoing catalyst for creativity and startups.

All three founders were paying attention to the growing trends across the country. Startup communities were popping up in cities all over the United States, many of them the same size as Jacksonville with similar resources but no real focal point. They all wanted to do something and create something, and they didn’t want to move to do it.

In this quick impromptu panel discussion, led by Jacksonville Jaguars voice, Brian Sexton, all three founders touch on “Why Now, Why OneSpark”.

Rivas talks about the timing saying “the time has never been better for this”. Rivas talked about how technology, smartphones in particular, people have the ability to connect from anywhere. To that end, while we talk about Chattanooga and Kansas City often when referring to high speed internet, Jacksonville Florida was the second market in the United States to get ClearWire’s WiMax service back in 2003.

Now with the connectivity, the people and the resources, with a catalyst like OneSpark residents of Jacksonville are starting to see they can do it right in their own city. Rivas has already gotten a taste of this by being a cofounder of CoWork Jax, a coworking space with an emphasis on collaboration and creativity.

Eusebio opened up his answer with the fact that he didn’t want to move. As a tech guy Eusebio was starting to feel the pinch, do I stay home, a place I love or do I brave the waters in another more tech savvy city like San Francisco. He set himself a 2 year deadline to come to that decision and during that two years the trio started creating OneSpark.

Rosete says he did this for the creators, he wants the creators to know that they have the resources to help get ideas, companies and creations off the ground without having to go take day jobs that creators don’t really want.

With a list of sponsors that reads like a telephone book, the city of Jacksonville is ripe and mobilized now to embrace startups, creators and entrepreneurs.

But OneSpark isn’t just about the local creators. They’ve attracted 464 projects from across the street, across the river, across the country and around the world. The 464 projects are spread out across 65 different venues in downtown Jacksonville.

Early estimates suggest that there will be between 15,000 to 20,000 people in Jacksonville over the next five days specifically for OneSpark, participating in voting, the speaker series and just walking around and checking out the 464 projects. Several local media outlets predict the swell of people downtown could reach 100,000 when you mix in the variety of great live entertainment that the OneSpark team has helped cook up.

While the focus of OneSpark and the creators is Music, Art, Science and Technology, when dusk hits the focus turns to the “entertainment district” where clubs, bars,restaurants and pop up venues are hosting hundreds of bands and performers in a festival atmosphere that can only rival something like SXSW. If anyone is keeping score there were around 800 attendees at the first SXSW festival and 29,000 official registered attendees for SXSWi 2013. The groundswell in Austin is also believed to be 100,000 when factoring in all three different festivals that make up sxsw.

On the subject of SXSW, Rivas hopes that in 10 years the OneSpark festival will still be going on, and people will say “Oh Jacksonville, that’s where they hold OneSpark”.

Well yes as a matter a fact we’ve got a ton more OneSpark coverage here at nibletz.com The Voice Of Startups Everywhere Else.