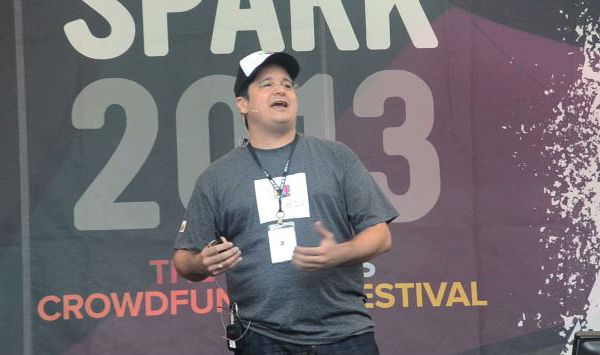 There were over 500 creators at OneSpark, The World’s Crowdfunding Festival, in Jacksonville from Wednesday through Sunday. They reported that over 115,000 people had been through downtown Jacksonville for the event. With 500 creators and over 100 tech/science creators, inventors and startups, there were a lot of people clamoring for my vote.

I saw a lot of creators I really liked. I’ll be doing my top 5 OneSpark startups and creators in the next day or two. However, a little after midnight Sunday morning I cast my vote for Jose Fermin and his startup Whata.tv.  I thought I’d share a little insight into what exactly whata.tv is and why I voted this way.

Whata.tv started with Fermin who is originally from Venezuela. He migrated to the United States with his family nine years ago. While in Venezuela, Fermin, who has two degrees in engineering, had a high profile position in satellite and communications, working with some of the biggest defense contractors in the world.

He wanted to move to the United States because he saw a land of opportunity so he did. However when he got to the US he realized quickly that he would have to start all over from scratch. Because of immigration laws and security clearances, Fermin, who worked with the likes of Lockhead Martin and Boeing in Venezuela, all of the sudden didn’t have the proper security clearance to work with the same exact people once he moved to the US.

He had one good prospect. He had a job offer in New York that paid very well, where he would serve as the International Director of satellite communications for a huge worldwide company. The problem was they needed him to go to Peru two days after he signed the contract, and he was still under his two week international travel waiting period from the immigration department. After the two weeks were up they didn’t have a spot for him.

Unscathed Fermin did anything and everything he could to provide for his family and not give up on his American dream. He painted houses, did roofing, general contract work and even worked at a dry cleaners. All the while he tinkered with side projects.

As the startup scene in Jacksvonille started to take shape he would go to meetups and Startup Weekend’s. Things weren’t what they were in Venezuela but he had his freedom and was living the American dream. Except for one thing that always bothered him.

Except for the World Cup, Fermin was unable to watch his Venezuelan soccer on American TV. He couldn’t even find the games online, just the scores.

Last winter, with Startup Weekend approaching, he decided to do something about it and created whata.tv. He was chosen to build at Startup Weekend and was able to do some of the preliminary leg work. He is relying on his connections and strengths in satellite and communications to help get this thing off the ground.

whata.tv is a paid subscription model tv viewing service. It works on tablets, smartphones and the web. The difference this time? The customer pays just $2.99 for a monthly subscription to a channel.

When Fermin originally pitched whata.tv it was just about Venezuela but the other entrepreneurs quickly made him realize he was onto something. As the service nears launch Fermin is in negotiations with tv channels across the world to carry their signals on whata.tv.

While we think they should be paying him for the added eyeballs, Fermin is giving them a percentage of every monthly subscription. In addition he plans on marketing his own advertising; including pre-roll on the channels as well as customized demographic advertising. He explained it to me like this: “Say you have a popular comedian coming to Orlando from Mexico. whata.tv will know how many people in Orlando subscribe to Mexican tv channels on the service and we could market the comedians ad specifically to them.”

The service is also great for military serving abroad to watch the U.S. channels that they are missing. The same goes for business people who travel all of the time. He is hoping to provide full streams of the channel including things like local news, something you can’t get a la carte from sites like hulu.

So why my vote?

Well I really couldn’t in good conscious vote for DJ Mercy, I was after all covering the startup angle (just kidding).

In voting for whata.tv it was as much about Fermin as it was about whata.tv and the disruption coming to the tv industry. While we shot this footage on Saturday afternoon, I had actually gone by their space on Thursday morning. That’s where I met Fermin’s high school aged daughter who gave just as good an interview, as her dad did a pitch.

Fermin called me on Saturday morning to make sure I wouldn’t miss the pitch, rain or shine he would be pitching. Fermin is also a startup community leader in Jacksonville. With the luck he had, first starting out in the US, it’s refreshing to meet someone like this.

And of course, in the wake of recent events, with everyone waving the “immigration reform” flag this week, Fermin and his family are a great reminder that great people come to the US from other countries all of the time.