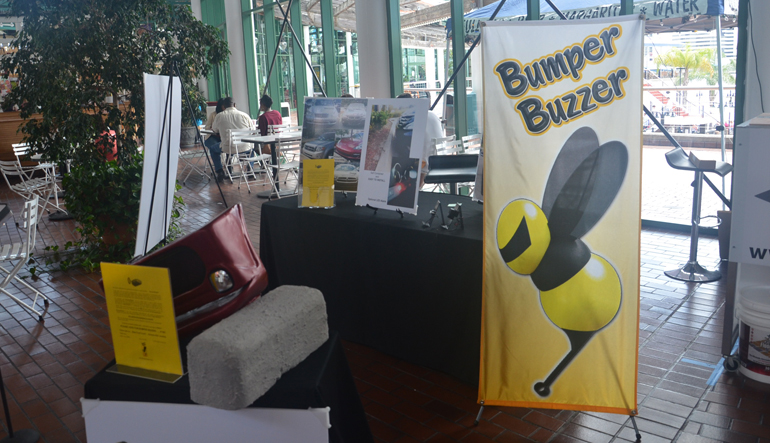 Mark Foss spent most of his career in outside sales with technology companies. As an outside sales person he was constantly parking his car in new places. Finally he got fed up of bumping into curbs, and those annoying concrete things in parking lots that you can’t see over the hood.

So he did what any natural entrepreneur would do, he invented something.

That something is the Bumper Buzzer. A device that hooks to the front of the car and sends a signal by radio frequency to a receiver inside the car that alerts the driver to the fact that they are about to hit something.

Now a lot of newer cars have some kind of option for the car that may assist in situations like this, however that option is usually hundreds of dollars and doesn’t necessarily work all the time.

Foss hopes that the introductory price for the Bumper Buzzer will be in the neighborhood of $24.95 and the best part is that it’s completely user installable. A couple of screws and some automotive 3M adhesive that comes in the package, and you’re ready to go. Because the signal is operating via RF there is no need to run wires through the front of the car.

Foss is a lot further along with his startup than some that we saw at OneSpark. He has a prototype built and is already working on getting the Bumper Buzzer in front of Telebrands, the Pennsylvania based company that former Shark Tank shark Kevin Harrington runs, better known as “As Seen On TV”.  Foss is convinced that with his easy set up and price point it’s a shoe-in for an infomercial.

Check out the video below and for more information you can visit bumperbuzzer.com

We have a ton more OneSpark startup coverage here at nibletz.com The Voice Of Startups Everywhere Else.