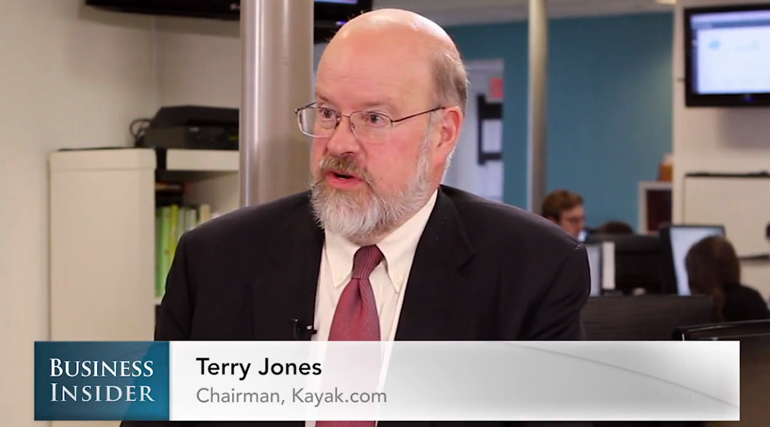 Kayak, the ultimate travel aggregator, was at one time a startup. Of course it was founded by Terry Jones the founder of Travelocity and the idea was the brain trust of Jones, and the founders of Orbitz and Expedia. Jones tells a great story about the formation of the company to Business Insider’s Nicholas Carlson in this interview.

One of the coolest things revealed in the interview though, was Kayak’s customer service model. Now if you’re a frequent traveler, like myself, you’ve inevitably been on the phone with the customer service department of one of the big three (Travelocity, Orbitz or Expedia). Many of you may not realize, but Hotwire and Hotels.com are both brands of Expedia.

Because of my customer loyalty with Hotels.com (over 500 rooms booked since 2008) I get to talk to their top tier customer service, but even then that can be a bit painful.

Kayak has taken an entirely different approach to customer service. Jones reveals in the video interview that they decided not to have a call center and that most of the customer service would be handled via email.  In that regard though, Kayak doesn’t even have a department to receive those emails. According to Jones they go directly to the programmers and  engineers which make up 80% of their 200 person staff.

“It keeps staffing low” Jones told Carlson. He also mentioned that it makes the engineering team directly accountable to the end user and gets things done faster. Evidently engineers don’t like to be pestered more than once.

This actually speaks to the big email debate that’s been going on, on the pages of big tech this past weekend. If everyone approached email with the same veracity as engineers the results for any company, be it a big huge enterprise or a startup could prove very beneficial.

I’ve come to find over the past two months or so that even a quick “hey I got this message and I’m working on it” goes a long way with a customer, vendor, or reader.

Like many of my big tech colleagues, I receive hundreds of PR emails a day pitching new startups. Even sending them an email back that’s short, sweet and to the point, seems to make them happy.

I’m sorry but the story you’ve pitched doesn’t fit into our current editorial strategy. Feel free to ping me back if there is an angle I’m not seeing and definitely keep me in mind for your other clients.

With that brief email I got a great story from a guest columnist and a different PR person sent another startup that was more in line with our strategy.

You can see Carlson’s full interview with Jones here at Business Insider.