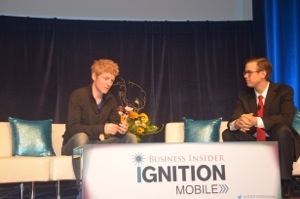 While there was much debate as to whether Collison became a millionaire at ate 19, one thing that’s been turning heads about this mobile payment startup is that their investors include Peter Thiel, Max Levchin and Elon Musk, the original founders of Paypal who are widely known as the “Paypal Mafia”.

One might find it odd that these three men who helped shape the web payment and now mobile payment space, may not want to invest in a company that competes with the one they founded.

Collison said that he believes that Thiel, Musk and Levchin, are still determined to solve the problems that they set out to solve with Paypal and the new problems that have cropped up in the mobile age.

All three founders are now removed from Paypal after selling the company for $1.5 billion back in 2002 to eBay,Paypal’s largest user.

While Paypal has been busy pushing an offline product to retail and working towards a more prominent position in the mobile space, Collison said he felt that innovation at Paypal stopped when Levchin, Musk and Thiel exited.

Check out the video below: