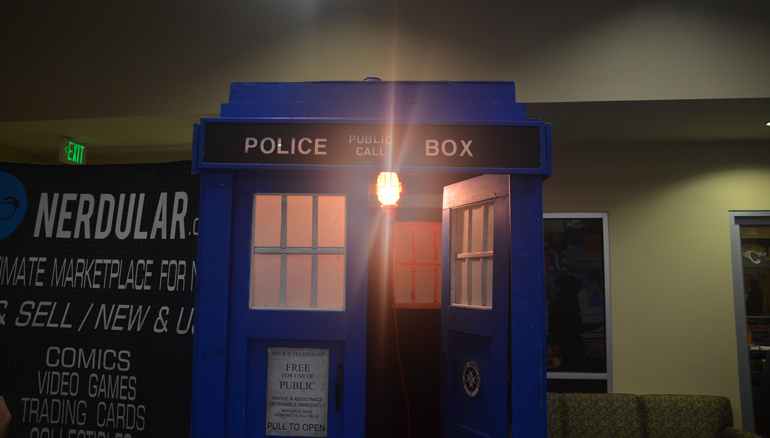 Last week at OneSpark, the World’s Crowdfunding Festival, a big blue tardis served as a beacon saying something nerdy was going on at the Dalton Agency building in downtown Jacksonville. Perhaps nerdy was the wrong word. The correct word would be Nerdular.

Nerdular was one of seven startups in attendance at OneSpark from the St. Augustine based “Factory” accelerator.

The Florida startup put their best foot forward at OneSpark and hosted an opening party on Wednesday night, and of course the tardis, ready for anyone who wanted to take a picture like Doctor Who.

So what is Nerdular? Well when we first heard about it, it was described as a marketplace for nerd stuff. You know, video game t-shirts, Doctor Who gear, nerdy memorabilia and crafts. We immediately thought,ThinkGeek. ThinkGeek is the powerhouse e-commerce site that sells a lot of that same stuff.

So what’s different about Nerdular?

According to one of their biggest mentors and supporters Jeremy Vaughn, co-founder of the Factory accelerator, Nerdular will be part ebay, part etsy and part community. Think of it essentially as a “merch” room at Comicon or Dragoncon. A big gigantic, organized, flea market of all things nerdy. There will be professional full time vendors selling anything from t-shirts to swords, to steam punk gear, and those hobbyist store owners with handmade wares.

The other thing that is going to drive Nerdular is the social community that will form around the site after it debuts later this year. Nerds from across the globe will be able to talk about all things nerdy in rooms, across status messages and even on pictures of items. So yes, add an element of Pinterest as well.

As for ThinkGeek, it’s strictly a traditional e-commerce site. ThinkGeek contracts with all their vendors, the same way Amazon or Best Buy does. They then house everything in their own warehouses and distribute it as things are sold.

The bad ass software developers at feature[23] are feverishly working on an online platform that bridges all of these ideas together. The Florida software development firm that Vaughn owns is also the backbone for The Factory accelerator. All of the Factory’s companies can draw from the experienced team at feature[23]. The developers know that the nerd audience can be very critical, especially when something is designed specifically for them.

Check out our interview video below you can find out more at nerdular.com