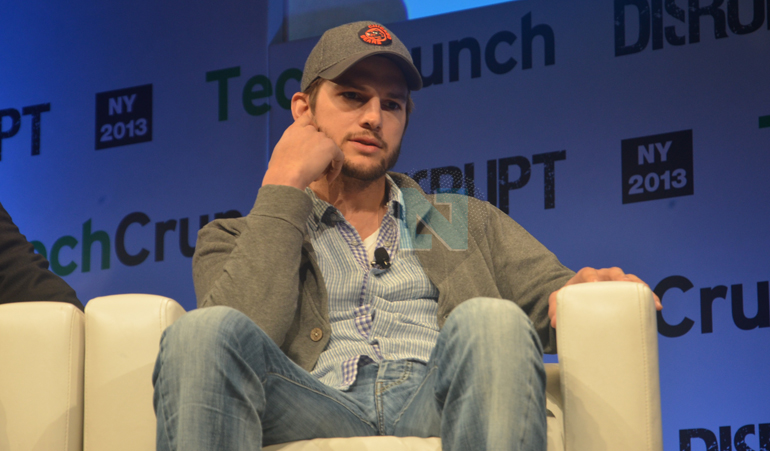 Ashton Kutcher was back on the mainstage at TechCrunch Disrupt NY 2013 after taking a year off. We first saw him at Disrupt in 2011 when he was being interviewed by Charlie Rose. It seems like so long ago. It was right after the Charlie Sheen blow up and after Kutcher had taken Sheen’s place on Two & A Half Men (which was off limits at Disrupt).

On Wednesday, during a fireside chat with Mike Arrington, Kutcher along with investment partner Guy Oseary (Madonna’s manager and the founder of Maverick Records) they discussed everything from what their investment firm likes to invest in, what they see in the future, a new fund raised at $100 million dollar valuation and drugs, ammo,assholes and anonymity.

When Arrington asked Kutcher about what he technologies he was looking forward to in the future, Kutcher talked first about sensors, and products that incorporated them. Then, he started talking about decentralizing currency and decentralizing security. In this part of the conversation he talked a lot about BitCoin and what the attraction is.

In evaluating deals Kutcher sometimes turns to “Hacking Volume” which he described as the number of people that are hacking a solution to a problem.  Kutcher says that the fact that people are so widely hacking Bitcoin validates the value of the service and the money.

Arrington re-confirmed what Kutcher had just said asking him “…The fact that BitCoin is being hacked at almost every point in the network is a good thing?”

From there Kutcher said yes and then talked about how the BitCoin infrastructure and anonymity could be used as a vehicle for people to police themselves and eliminate “Big Brother”. Obviously this speaks to anonymity and CISPA which was recently defeated in Congress.

To reiterate the value of BitCoin, Kutcher said “I think the fact that you can by drugs and ammo with it is actually a validator of the currency itself.

As to decentralizing security, Kutcher is looking forward to a time when we can “…civically monitor each other in anonymous way actually keeps the anonymity of the internet, we don’t have to worry about big brother, and that same infrastructure that built out BitCoin  for mass good” Kutcher continued “it’s the old sort of, if everyone had a dart gun and we drove around, and shot darts at assholes driving, we’d know really quick who all the assholes are”

At that point Arrington started cracking up on stage and said he could just imagine how many darts he’d have in his car.

Watch this great video clip from that fireside chat below.