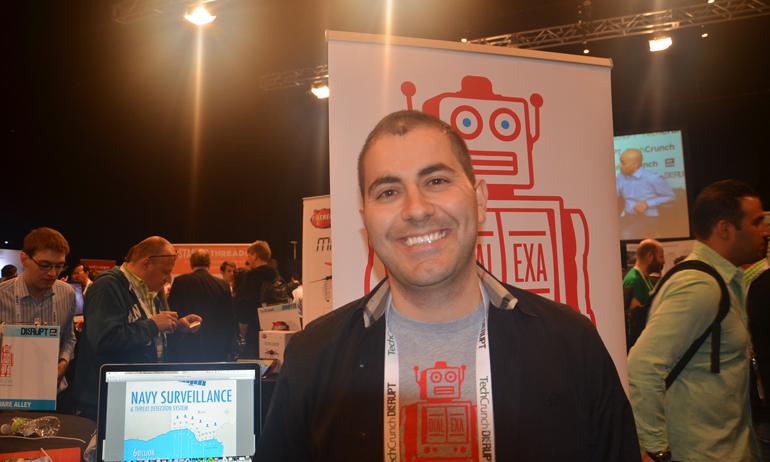 This year marked my third trip to TechCrunch Disrupt NYC and my 7th trip to a TechCrunch Disrupt event overall. Typically we expect to see some cool big data startups, social mobile startups, food startups and over the last two years, hardware startups. I don’t think in all the startup events I’ve ever been too, I’ve seen anything quite like Dialexa.

Dialexa is a startup themselves, but what they actually are is a technology development company. The company, formed by entrepreneurs Mark Haidar and Scott Harper, Dialexa was founded upon recognizing a huge market demand for innovative and scalable technology solutions. Mark and Scott serve as Co-CEOs jointly spearheading operations, strategy, local and international sales, product development and engineering for clients and Dialexa Labs.

Harper and Haidar met each other at 2GO Software where Haidar was the CTO and Harper joined as Head of Operations. 2GO was the recipient of the 2010 Honeywell Scanning and Mobility ISV Partner Of The Year.

Prior to meeting at 2GO, the founders had a multitude of experience in technology and starting companies. Previously Mark led the development of a state of the art research and development project for the US Army Tank Automotive Research Development Engineering Center (TARDEC).  He was able to successfully research, design, develop, and validate an original service-oriented intra and inter-vehicle communication system for transportation, robotic, and military systems. This technology enhances each vehicle’s situation assessment and awareness in military combat situations and has the potential to help create safer and more efficient highway systems. Scott previously started a web based marketplace for tutors in the college tutoring market, a web based suite of software tools that helped non-profit organizations enable their supporters to give money for free, and was part of an initiative to start up a bank focused on the medical community that heavily leveraged technology and eventually led to the buyout attempt of a several hundred million dollar bank.

So what are they working on at Dialexa? Oh just little stuff like:

A surveillance and protection system for the Nigerian navy. The Nigerian navy is losing $6 billion dollars a year in crude oil. They don’t have the man power or equipment to cover their entire shoreline. Dialexa is developing a system using drones, small submarines, cameras and a monitoring system to alert the navy when people, or machines are stealing their oil.

They also have a GPS system in the works that will allow someone to track anything. The system can track packages, people, kids, money in armored cars, etc. What’s unique about this system is it’s designed to require just a charge once a week and works through a variety of mobile systems.

They also have a system in development that will print 3D teeth from 2D scans. Haidar told us in an interview the entire process of evaluating a tooth for surgery could take months. Now it is down to just hours.

Haidar credits the team they’ve assembled to the success they’ve had so far and the team continues growing. No project or startup is too big or too small for Dialexa. They even have your general mobile startups within their portfolio of companies that they are helping take to market.

Watch our video interview with Mark Haidar below and for more information visit dialexa.com

We’ve got over 25 more startup stories from TechCrunch Disrupt NY 2013 here at nibletz.com the voice of startups everywhere else.