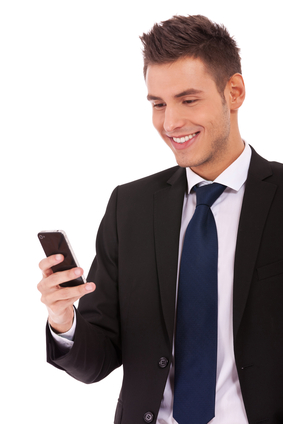 The best entrepreneurs usually aren’t organized. Sure, they may keep their paperwork in order and clean up after themselves, but inside, their wheels are cranking out a thousand ideas per minute.

Luckily, modern entrepreneurs have a number of tools to help them keep things running. The most indispensable accessory? Smartphones. These powerful devices keep entrepreneurs productive on the road, at home, and wherever else the job might take them.

Apple revolutionized the smartphone industry when it introduced iPhone in 2007, but Samsung, HTC and Blackberry have also emerged with impressive devices in 2013. Your smartphone is your closest companion. Choose wisely and you’ll keep your business on track

The iPhone is a design marvel, but the App Store is what peaks startup owners’ interests. Android and Windows also have app stores, but they don’t quite stack up. Apple owns a 73% market share in app industry, according to Forbes.com. Google is next at 27%. For entrepreneurs, that means Apple is still king of the apps, with such titles as Evernote, a cloud-based note-taking app, and Osito, a personal-assistant app. Apple’s iPhone isn’t the cheapest device ($200 with a two-year contract), and it usually doesn’t come with the cheapest service, but if you spent much of the day on your smartphone, iPhone offers the best overall experience.

Plain and simple, the HTC One is the best piece of hardware on the market today. With it’s aluminum body, frontal speakers and Ultrapixel camera, the HTC one took its place with iPhone and Samsung Galaxy on the top echelon of smartphones. Startup owners may wonder if the HTC One has the apps to back up great hardware, but HTC uses the Android operating system, which boasts the fastest-growing app store, Google Play. HTC appears to have business owners in mind, too. A may press released noted that the HTC One offers firm 256-bit encryption for strong security and Sense-enabled productivity opportunities.

“Customers want the freedom to choose the device they use on the job, and companies want to know that devices brought into the workplace are enterprise ready,” HTC executive director David Jaeger said in a press release. HTC appears to be on the rise, making the HTC One an appealing option for entrepreneurs.

Experienced entrepreneurs probably have a soft spot for Blackberry. These devices reigned supreme in the business world before Apple changed the game. Unfortunately, Blackberry held on too long to the QWERTY keyboard, and now it’s playing catch up. The Z10 is Blackberry’s latest touch-screen flagship. The Z10 is particularly interesting for businesses who use Blackberry Enterprise Services and Blackberry Balance. All three can sync together, simplifying life for entrepreneurs.

Andrew White is a mobile app developer and freelance writer originally from the Pacific Northwest.