Startups like Brooklyn based JustDecide come to mind when we think about social decision making platforms. Where others have fallen short in the past though, the crew at bounceit has figured out ways to make social decision making more fluid, easy to take in and easier to decide and vote on. Their highly visual platform makes the entire process more intuitive.

Users begin by uploading a question or statement, accompanied by a photo: “Should I buy this outfit?” “Is this car cool?” “Want to go out after the game?” Other users vote your question up or down for yes/no, or like/dislike. A realtime line graph shows you all theirresponses over time to aid in your decision making! 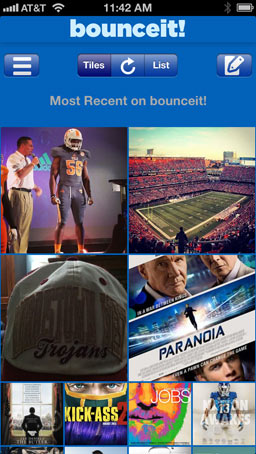 Until bounceit, many people relied on Facebook and their own social networks to help make decisions; “With bounceit!™, a user can post an opinion, decision, idea or just a cool photo, and thanks to our unique line graph they’ll actually see instantly if people agree or not. It’s crowd-sourced decision making at its best! With our graphing capabilities, a user immediately sees if something is a like or a dislike. You can see whether there is overwhelming agreement or any struggle it has gone through among users. That tells a much more powerful story than a bar graph or percentages.” co-founder Gary Hardin told nibletz in an interview. 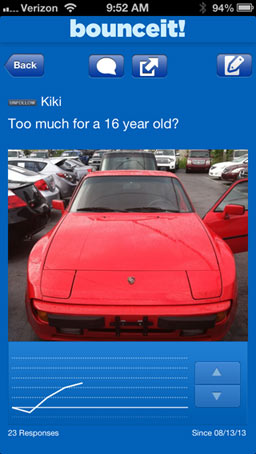 Hardin explained, “People today research and bounce ideas off friends before they do something or buy an item. bounceit!™ streamlines that process for them. Crowdsourced sharing and decision making is everywhere now. We just make it more fun and in one centralized location!”

Bounceit is now available in the iTunes app store, download it here. For more information visit bounceit.com. Check out Bounceit in person at Everywhere Else Cincinnati.