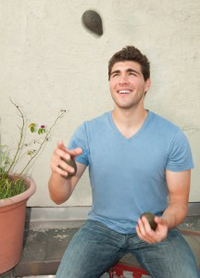 Derek Flanzraich is a keynote speaker at Everywhere Else Cincinnati, September 29-October 1st (tickets available here). Derek originally published this piece in July of 2012 in conjunction with the Young Entrepreneur Council.

A year ago, I started Greatist with no real clue what I was doing. We’re now the fastest-growing health and fitness site on the Web, so a lot has gone right. But a lot has als0 gone wrong. A year ago, I’d never really hired someone. Never really fired someone. Never incorporated a company in Delaware. Never spent days accounting in Excel, signed an office lease, paid the IRS, saved a crashing website, negotiated with a potential acquirer, or been responsible for six people’s paychecks. But those things could always have been figured out.

The biggest challenges, instead, have been personal, and on that level, it’s never been harder. I’ve never been so busy, so behind, so unsatisfied with how much I can accomplish with the mere 24 hours in each day. At the same time, I’ve never been happier. I’ve never been more optimistic, more excited for what can be achieved, more able to genuinely say I love every second of what I’m doing. Now I can.

Here are 7 lessons I’ve learned this past year of being an entrepreneur:

Derek Flanzraich is the founder and CEO of Greatist, a health and fitness media startup on a mission to make better choices easier for everyone. Also a fan of theme parks and theme bars.

The Young Entrepreneur Council (YEC) is an invite-only nonprofit organization comprised of the world’s most promising young entrepreneurs. The YEC recently published #FixYoungAmerica: How to Rebuild Our Economy and Put Young Americans Back to Work (for Good), a book of 30+ proven solutions to help end youth unemployment.