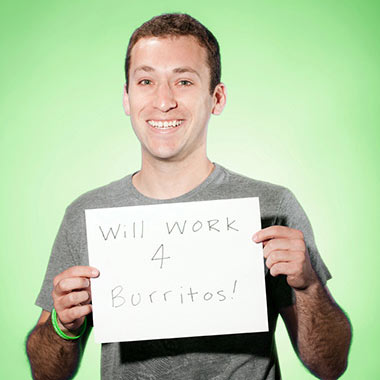 Correction: We originally reported that Austin was the COO of GiveForward and that he would be speaking on raising money outside of SV. He is actually the President of GiveForward, and he plans to speak on the importance of culture in your startup. Corrections have been made below.

Ethan Austin is the President and burrito-eating champion at GiveForward, a Chicago startup he co-founded as a way to help people do personal fundraising.  As a child Austin lost his father to colon cancer, and over the years he looked for ways to help people with cancer. Then, he ran the Marine Corps Marathon in DC to raise money for Memphis’ St. Jude Children’s Research Hospital. During that race, Austin had an idea.

Through his personal web page, Austin, who was trained as a lawyer with a BA from Emory and a JD from American University, raised small amounts of money from people all over the world. This was the precursor to GiveForward.

It was obviously fate when he met co-founder Desiree Vargas Wrigley because she had already written a business plan similar to the Austin’s idea. The two collaborated and cofounded GiveForward.

During is Everywhere Else Cincinnati speech, Austin will talk about the importance of building culture as we build our companies.

Austin should be a great enough reason to get your discounted attendee or Startup Avenue ticket today, but if not here’s 42 more reasons.