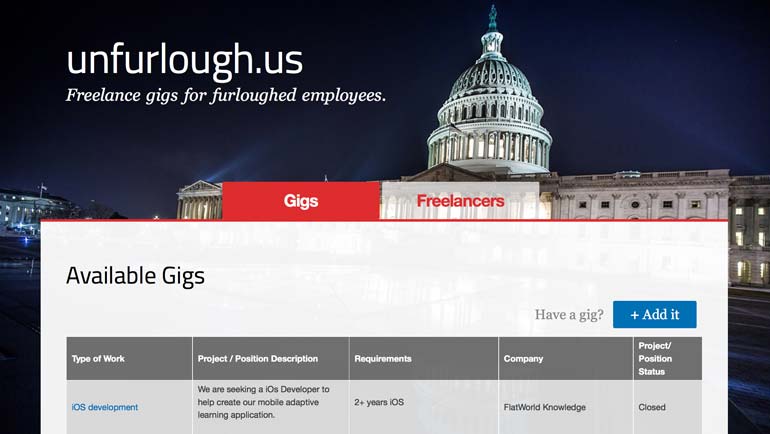 Last week we broke the news that the entrepreneurs at 1776 in Washington, DC jumped into action when the federal government was first shut down. The first thing they did was hold an impromptu event which brought together the startups at 1776 with furloughed federal workers in the area.

What came out of that was the Google Doc we reported about last Friday. 1776 found a clear path between workers on furlough and startups that needed paid workers, volunteers or people to do small projects.

They’ve now turned the simple GoogleDoc into unfurlough.us which is picking up a lot of traction. The new jobs site, set up to connect furloughed workers with positions in startups, caught the eye of Mashable on Tuesday.

Mashable revealed that all kinds of people are signing up, even people that aren’t on furlough. 1776 cofounder Donna Harris told Mashable that they aren’t going to take down anyone’s profile.

So is it working?

Mashable reports that Josh Hurd, the founder of Nonprofitmetrics, used unfurlough.us to find a blogger who he is paying a minimum of $35 per post. Lily Bradley who works for the Department of Health and Human Services is also on furlough. She found a temporary job taking pictures for a startup that pays more than her day job.

1776 does have a warning posted on the unfurlough.us website reminding furloughed workers to check their agency’s “ethics guidance” to make sure they are allowed to engage in outside work while on furlough.

1776 even has their own listing looking for someone to do PR & Marketing research.

Building unfurlough.us was a community effort between blen and 1776 and built on the open source platform drupal, reportedly in under five hours.