Top research firm CB Insights released some very relevant and interesting data last week. The firm has been diving into their VC data to better understand fund performance and syndicate. In what they call one of their “more polarizing” briefs, they revealed that even today Silicon Valley is the most relevant market for venture capital. Silicon Valley is still producing the most exits.

Their latest data, measuring deal flow across the country, Silicon Valley still represents 52% of VC backed exits, leaving “everywhere else” with an improved, but still less, 48%. 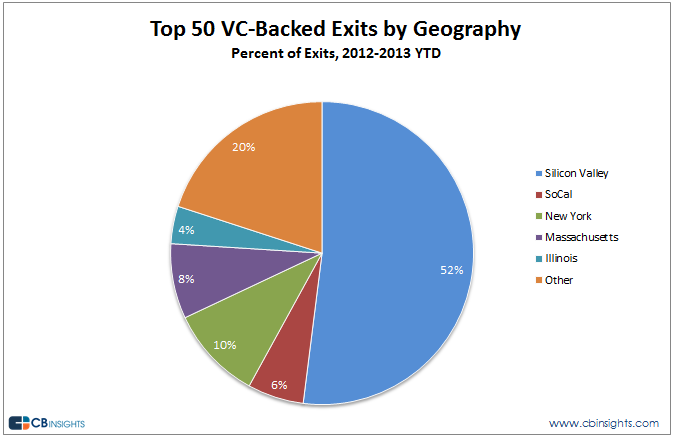 There are even investors who believe that New York is a waste of time.

CB Insights reports that at a recent dinner in NY hosted by Silicon Valley firm Lowenstein Sandler one VC said “New York is an irrelevant market for us as a venture capital firm. They went on to say that from the investor’s perspective allocating his firm,s time to New York or any other market outside of Silicon Valley was a waste of time.

Late last month AOL founder Steve Case announced that his Revolution Venture Fund had raised $200 million dollars that they were specifically going to use to back companies everywhere else. Case’s big mantra is “Rise of the rest,” and that is exactly what’s going on now.

There have always been investors and startups everywhere else. One of the fundamental problems we’ve found since launching Nibletz and the Everywhere Else conferences is that entrepreneurs and investors exist everywhere. The problem lies in the fact that the entrepreneurs believe that it’s best to move to Silicon Valley or in some regards New York City to grow their company. At the same time the investors either don’t know that there are good deals in their own neighborhoods or it’s just flashier to find an investment in a larger city or participate in rounds with Silicon Valley.

Investors like Mercury Fund’s Blair Garrou, Dundee Venture Capital’s Mark Hasebroock, and Drive Capital’s Mark Kvamme all see the value in finding startups worth investing in everywhere else, thus contributing to the rise of the rest. These investors are not alone. At our recent Everywhere Else Cincinnati conference, we had over 40 investors from across the country that represented over $1 billion dollars in deals across Everywhere Else. (Note we still consider New York Everywhere Else and obviously many others do too.)

Events like Big Omaha, Big KC, UpGlobal’s startup summit, and the Everywhere Else Conference Series all unite entrepreneurs from everywhere else to continue developing their own market.

The notion that innovation only happens in Silicon Valley is quite ridiculous. Cars were invented in Detroit. Air planes were invented in North Carolina (some may dispute that). The overnight package was invented in Memphis, Tennessee. In the overall landscape of things, everywhere else far outweighs the rest of the country as far as large corporations being founded and continuing to produce.